Nine weeks to go (plus one day)

I decided to check the last Christmas posting dates for the Royal Mail.  First class cards should be in the post by December 22nd and second class by 18th December.  I'm usually well ahead of that but I still like to know! 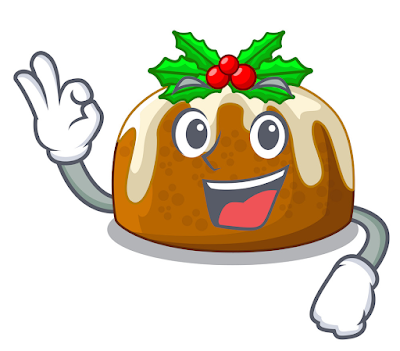 I've started to think about Christmas food.  I've already made some jams and chutneys and may make some more if my knee replacement is happy with the thought.  The next thing is Christmas puddings.  Considering that this is a household of one I seem to make quite a lot: my current list is for seven one-pound puds and eight half-pound puds!  This week I made my first batch using this recipe.  This quantity will do two one-pound puds with a bit over.

Zest and juice of 1 lemon

Pinch each of salt and freshly

1 Put the dried fruit, liqueur, lemon zest and juice into a non-metallic mixing bowl. Cover and leave to soak overnight. Lightly butter a 1 litre (1¾ pint) pudding basin and put in a cool place. I use reusable plastic bowls with lids.

2 The next day, put the soaked fruit into a large mixing bowl and add the remaining ingredients. Mix together until well combined. Spoon the mixture into the prepared pudding basin, pushing it down firmly, and level the surface.

3 To cook, put the pudding in a slow cooker with water halfway up the basin.  Cook for an hour on high then reduce to low for about ten hours.   Store in a cool, dark place for up to three months.

4 On Christmas Day put it in a slow cooker for about four hours.  You could microwave but using a slow cooker means a better flavour and less work just before serving and you could even cook it in the garage or other out-of-the-way spot meaning there’s one less thing in the kitchen.  I cook mine in my utility room.

And I've been making presents.  Actually I've been making a few throughout the year but this week I made lavender bags.  I used a cheap pack of five inch squares which were so badly cut that I wouldn't consider them for a larger project but they were fine for this.

Posted by Frugally challenged at 17:25