I'm having a very sad day today.  I have said my final goodbyes to my Auntie Bettie.  In previous posts I've called her Auntie Hettie as I always change people's names on my blog but now she has died I'll call her Auntie Bettie.

Bettie was my mum's little sister.  There was an eight year age difference between them and Bettie spent a lot of her childhood being minded by Mother as Grandma was a very busy farmer's wife.  Bettie was 15 when my parents were married and she was chief bridesmaid.   There was a very special bond between Bettie and my sister who was born when Bettie was 18.

Bettie was the most wonderful aunt any child could hope for!  She was a primary school teacher and enjoyed being with children but when she was with us she was such fun, taking us on picnics or visits to the seaside or Father Christmas.  She had a skill which I have never known in anyone else - she could touch the end of her nose with her tongue!  This would have us all in fits of laughter and I'll bet some people reading this can no more resist having a go than we could as children.

She didn't find romance herself until she was thirty six and she married Gordon.  They had two children and her years as a wife and mum were for her the best years.  Sadly the marriage lasted only twenty two years for Gordon died very suddenly when he was in his fifties leaving Bettie with a daughter away at college and a son still in his teens.

That was nearly forty years ago but Bettie has always been a well loved and respected member of the community here in Caistor.  She was active in the British  Legion and the Methodist chapel.  She was a member of the Women's Institute and the (then) Women's Voluntary Service.  It was because of Bettie that I came to live in Caistor - I wanted the opportunity for as wonderful a life as she was living.

Dying in a time of corona virus has meant that she has had very limited visitors and her care has fallen totally on her daughter who has been magnificent.  Today just her son, her daughter and I joined the minister for a very quiet burial, nothing like the huge funeral there would have been in normal times but the streets were lined with people paying their respects.

I have been privileged to be her niece.
Posted by Frugally challenged at 19:15 15 comments:

A couple of smiles for a rainy day

Jack asked me to pass this on to you.

The value of old age
Remember old folk are worth a fortune. They’ve got silver in their hair, gold in their teeth, stones in their kidneys and gas in their stomachs.
I have become a little older since I spoke to you last. Changes have come into my life. I am a frivolous old girl and I’m seeing five gentlemen each day. As soon as I wake, Will Power helps me out of bed. Then I go and visit Lou, then next I go to Mr Quaker who gives me my oats.
They leave and Arthur Ritus shows up and he stays all day but he doesn’t stay in one place very long. He takes me from joint to joint and after such a busy life I am ready for bed with Johnny Walker – what a life! Oh, ad I’m flirting with Al Zymer.
The vicar came the other day and said, At your age shouldn’t you be thinking of the hereafter?” I told, “Oh but I do! No matter where I am, in the lounge, in the kitchen or in a shop, I ask myself ‘Now, what am I here-after?’” 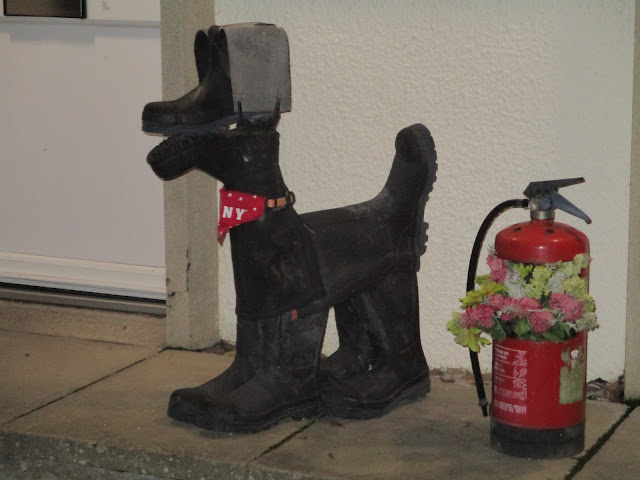 Do you Remember Welly Dog?  ?  He was desperate to join the Fire Brigade. 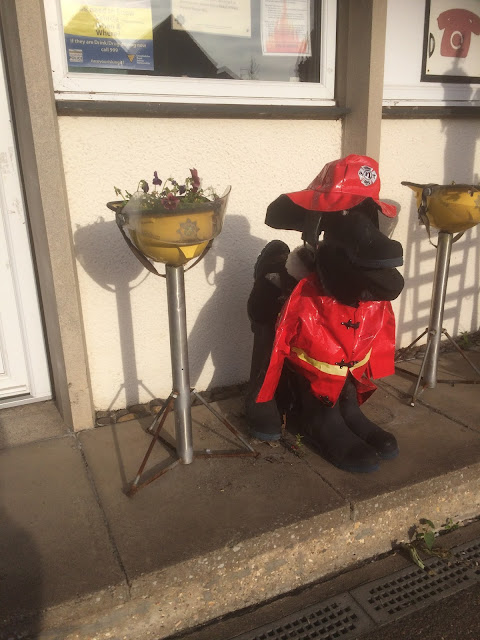 I have been out a little on my trundle truck and I went past our Fire Station.  It seems he has achieved his ambition and become a fire fighter.  Go, Welly Dog!

Hi everyone, it's me again.  Hope you're all keeping safe and well.

First I must tell you a funny thing which happened to someone we all know.  I won't mention any names because I don't like embarrassing anyone but this person is  a very good friend to me (and I hope she still will be when I've told you this story) and oh, she's also a retired Vicar.  Just lately we've had some very warm weather and it's been very hot at night.  Well one night this person decided to open her bedroom window before she went to bed to let some cool air in.    After leaving the window wide open she went back to the sitting room.  After ten minutes she was startled to see a cat walk into the room.  The air turned blue and so did the language.  I've waited years for the Vicar to swear and I missed it!  But she told me word for word what had happened so yes, I did hear her swear.  I thought it was funny, and Thank You, Lord, for making her so human.  Since then the big window has stayed shut.

While I'm on the subject of windows, on my last visit I was asked to clean the front windows as the last time they were cleaned was when I did it three and a half years ago.  I felt so sorry for The Vicar she drew the curtains and the track fell down but at least she could see out of the window now.  I haven't been going into people's houses because of Covid 19 but she has a cousin who has PPE so he got suited and booted and fixed the track.  Thank you, Cousin C!

What a nice surprise I got last Sunday - a roast beef Sunday dinner followed by jam roly-poly, all from a local restaurant!  Someone put my name forward so I got a free dinner.  I was nominated because of the care and compassion I showed looking after Mrs Jack for the last two years but I did that out of love. I fell in love with her the first time I met her and I stayed that way for the next 53 years.  It was our fifty second wedding anniversary last Monday. The person who put my name forward is a nurse on the front line taking care of people so N , please stay safe – we don’t want you to be poorly.  We couldn’t manage without you.  Thank you for thinking of me.

I'm not coping so well at the moment but the Vicar and I ring each other every morning.  Much to her delight she's caught me in the bath, on the loo and in a few other interesting places.

The Vicar likes to know what I'm having for my meals.  The other day I had salad and I didn't have any coleslaw.  She told me to make my own and told me the recipe.  I hadn't got some of the ingredients so I did Jack's way.  I cut a crinkly cabbage into small chunks, grated a couple of carrots, diced a raw onion and (here it comes) I chucked it all into a bowl.  I hadn't got any mayonnaise so instead I used salad cream and two sachets of tomato sauce which Mr Wetherspoon had donated and my was it good!   It went on King Prawns, corned beef, lettuce, more raw onion, beetroot, peppers and celery.  I put Rice Crispies on top just to make it look good.  Hope your mouths are watering.  If any of you come for one of my meals make sure you bring the Gaviscon with you.  I'm taking bookings for Christmas.  What will that turn out like?

Other news.  I'm getting the Vicar's garden into some sort of order.  Just so you all know what a kind person she s, she's offered to sew the hem on my trousers up as that's a skill I haven't acquired yet. 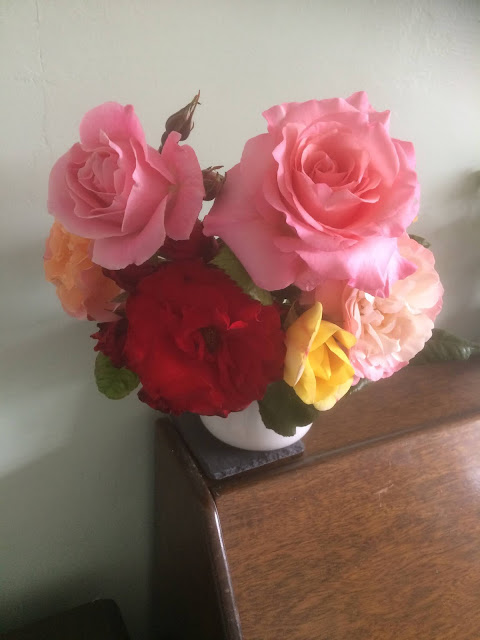 The Vicar is having a rough time this year.  First my brother died then Mrs Jack and last Saturday the Vicar's auntie died and another of her friend's is none too good.  I hope I can help with her problems by being Jack, the man who likes to make people smile and be happy.  That gives me great joy.

Please be careful and look after yourselves.

Note from The Vicar.  When Jack came he brought me these lovely roses.  He went home with a rather more conventional coleslaw, some braised red cabbage, and a loaf of bread.

Posted by Frugally challenged at 11:54 6 comments: