Every day is a thinking day but 22nd February is Thinking Day! 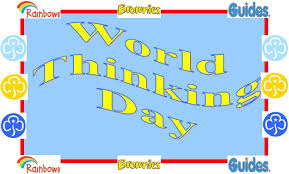 When I was a little girl we used to join up with about twelve Brownie Packs for an evening of activities reminding us of Brownies throughout the world.  There was always a parade of world uniforms, always decorated biscuits to eat and there was always a collection of Thinking Day Pennies.  These pennies had to be polished for the occasion and they were laid out on the floor in the form of a Guide trefoil badge.  Later all our pennies would be gathered up and sent to Brownies overseas to help with the development of guiding and scouting.

Today I shall be meeting up with fellow members of the Trefoil Guild and together we will have a bring-and-share lunch and there will again be a collection but I think that most of us will give rather more than a penny!

So, greetings to everyone who has ever been involved in Guiding and Scouting, wherever in the world you may be!
Posted by Frugally challenged at 09:11 5 comments:

We've had real hello weather this week and I decided that the time had come for a visit to Normanby Park.  You know about hello weather, don't you?  It happens in the spring.   In the winter people are huddled down in their coats.  In the summer lovely days can get taken for granted.  On a glorious day in the spring everyone I pass says the same thing.  "Hello. isn't it a lovely day!"  And I just have to agree! 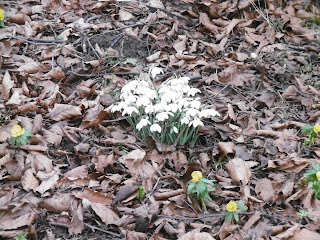 Anyway, Normanby was lovely this week.  There were a lot of grandparents on child-care duty.  Happy children were showing off their skills on their bikes to grannies and grandpas who can be relied on to admire them.  Little dogs were being taken for exciting walks and they too were greeting each other.  Snowdrops and aconites were brightening the spring although I did think these pot marigolds were a tad optimistic flowering in February. The gardeners are still gathering wonderful winter vegetables but the land is being readied for planting in a few weeks.
February is indeed fun and I think it's just the start of a fun year!  WHOOPPEE!!! 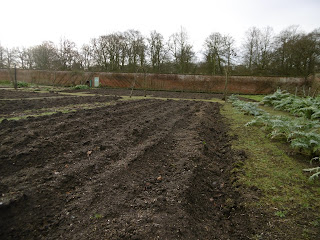 Posted by Frugally challenged at 19:20 3 comments:

A special day out

Remember I said that February was for fun?  Well, I meant it and yesterday was a fun day out.

I went to Edinburgh and back in one day!    I've just checked and that would be 550 miles by road but I went by rail.  I've had the trip organised for a few weeks and have been looking forward to it SO MUCH.

For various complicated reasons I found myself with quite a bit of money in my Red Spotted Hanky account and I decided to fulfill a vague but long-held ambition to go on the East Coast Main Line north from Newark to Edinburgh.

The journey was marvellous.  I was able to travel First Class and I can thoroughly recommend it.  Soon after I boarded complementary breakfast was served.  I had a British Rail breakfast when I was travelling to Gatwick to fly to Nigeria when I was twenty one and remembered it as really good and I can say that my memory was exactly right.  Thick cut bacon, tasty sausage, perfectly fried egg, and all the rest, served on a good hot plate with lovely toast as well as lovely orange juice and coffee.

The early part of the journey was through fairly flat country because of course, the Victorian engineers who built the line would have taken it across the levellest route possible but further north they had no choice but to build cuttings and embankments, tunnels, viaducts and bridges.

I'll write some more tomorrow but for now, here's someone I met on my journey. 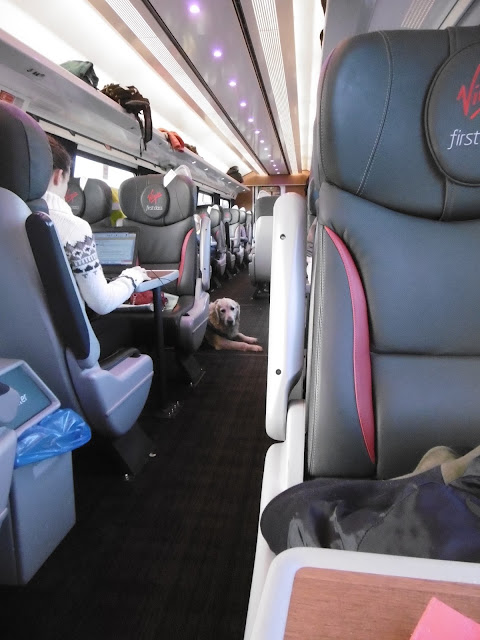 Posted by Frugally challenged at 20:07 7 comments:

Email ThisBlogThis!Share to TwitterShare to FacebookShare to Pinterest
Labels: Days out

I never knew I needed a project bag.

I didn't know I needed a project bag - but the wonderful Tracy from http://madaboutbagsuk.blogspot.co.uk/ knew that was exactly what I needed! 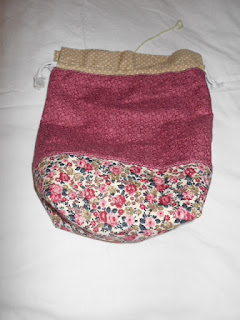 I was paired with Tracy in a Santa Sack Swap and she is brilliant!  Tracy, I'm really sorry I haven't written about the lovely gifts you sent but I have been having camera problems (among other problems) and I felt that without pictures I couldn't do justice to your wonderful gifts. 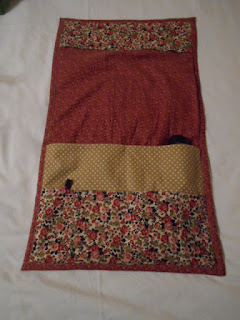 The swap is amazing.  Pairs are organised back in June/July and then swappers "stalk" each other.  Tracy picked up that I sit for quite a long period each day so she sent me an armchair saddle so I can have close at hand the phone, remotes, craft stuff and all the rest of the paraphernalia of everyday life.

Now I knew I needed an armchair saddle - I just never got around to making one!  What I didn't know was that I needed a project bag.  I usually drop the ball of yarn into a spare waste paper bin but this is great.  It anchors the wool so I don't have to chase it around the room and I can put my spare crochet hook and other bits and pieces in it. 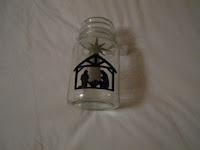 Tracy also sent me a jar on with a nativity silhouette.  Some people might just use that at Christmas but not me.  I've filled it with some of those fiddly ball end left at the ed of projects and used in small creative projects. 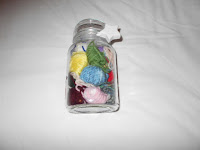 For the time being I'll just say, "Tracy, you are wonderful!"And I'll write about some of the other gifts later in the month!
Posted by Frugally challenged at 09:12 3 comments:

One hundred years and one week ago

My Mum was born on the 25th January 1917 so last week she would have been a hundred years old.

She was the second child and elder daughter of a Lincolnshire farmer and she lived all her life in this county.  She married a friend of her brother and together my Mother and Father had my sister and me.  They were married over fifty five years but the last eleven years of her life she was a widow,

She lived with me for the last two years of her life as she became wheelchair bound and she died in my arms in 2006.

That's just the bare bones of a life well lived.  Thank you, Mummy
Posted by Frugally challenged at 17:09 10 comments:

Well that didn't go well, did it!

I feel a bit sad that so many people seem to be stopping blogging at the moment, including several whose blogs I really enjoy.  Not only that but January seems to have been a very lean month for posts from quite a lot of people - including me!

I have decided that my aim this month will be February Fun.  I've got a very special day out arranged next week, I've just acquired a new-to-me camera, and life should be good.  The month ends with Pancake Day so provided I am in my own house (see my other blog for why I need to say that) I shall definitely be finishing on an up-beat theme.  I shall interpret "fun" fairly widely to include pleasure and delight in all sorts of things.  No mere foggy February for me!  I feel better just for writing this so if you are reading (which you are!) I hope February's a fun month for you too!

Posted by Frugally challenged at 11:12 7 comments: