Preparing food for others is a great delight but one which I experience all too rarely.  However, I make  pretty good "Christmas pudding".  I've put it into inverted commas because I'm not sure if, strictly speaking, it is a Christmas pudding as it has no currants and raisins but dried strawberries, blueberries, cranberries and sour cherries.  No-one complains though.

I eat alone on Christmas Day but I make puddings for three families. I think they make great Christmas presents as there's nothing to store after the day!


Method
1 Put the dried fruit, liqueur, lemon zest and juice into a non-metallic mixing bowl. Cover and leave to soak overnight. Lightly butter a 1 litre (1¾ pint) pudding basin and put in a cool place. I use reusable plastic bowls with lids.
2 The next day, put the soaked fruit into a large mixing bowl and add the remaining ingredients. Mix together until well combined. Spoon the mixture into the prepared pudding basin, pushing it down firmly, and level the surface.
3 To cook, put the pudding in a slow cooker with water halfway up the basin.  Cook for an hour on high then reduce to low for about ten hours.   Store in a cool, dark place for up to three months.
4 On Christmas Day put it in a slow cooker for about four hours.  You could microwave but using a slow cooker means less work just before serving and you could even cook it in the garage or other out-of-the-way spot meaning there’s one less thing in the kitchen.  When I have one I cook it in my utility room.

You know what I'm talking about!

And, like it or not, the high street is gearing itself up.  I went to our local garden centre last week and as usual found that I could buy Christmas there.  They sell trees, decorations, food, gifts and anything else you could possible need. 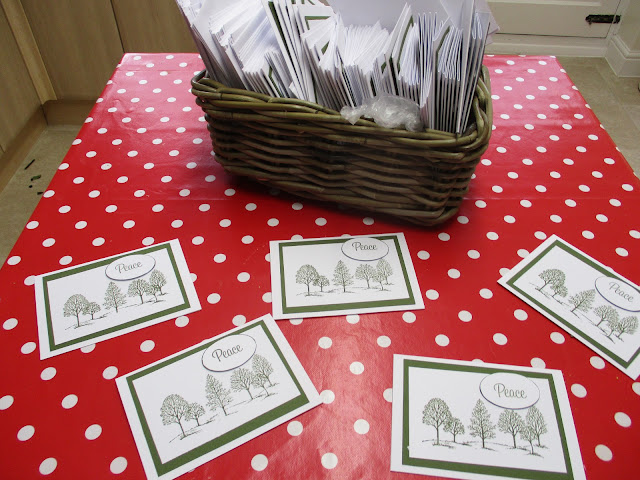 I think many people will, by now, have quietly started their preparations.  Maybe a fruit cake has been made.  Or a pair of socks knitted.  Or special meals planned.  Or even the odd parcel lovingly wrapped and hidden away.

Most of the blogs I read are written by people who are not content to buy Christmas.  The love which is in our hearts is funelled through our fingers as much as our purses.  We bake, sew, knit, crochet, craft out of love for our families and friends.

One of the first things I make is Christmas cards.  I have a new design each year but I make about a hundred, all the same. Yesterday I finished making the cards.  All I need to do now is write in them!
Posted by Frugally challenged at 07:19 8 comments:

How did that happen?

I'm sixty eight!  How did that happen? I know when it happened - last Wednesday, 23rd October if you really want to know - but I can't believe I've been around for sixty eight years.

I'm having a super life.  I was, my Mother told me, a wonderful surprise as she had almost given up hope of a second child.  I was born into a loving family with just one sister but seemingly countless cousins.  I flourished at school (at least until the sixth form which I loathed) and also enjoyed out of school activities.

I trained as a librarian and did Voluntary Service Overseas as a librarian in Nigeria, setting up school libraries in the former Biafra.  Maybe being in a motor cycle crash and needing medical repatriation wasn't a good idea though!

I worked in libraries in the UK for several years then joined the Civil Service for a few years before starting full time Christian ministry when I was thirty six.

I was one of the first women to become priests in the Church of England and I worked in the C of E until I retired when I was fifty eight.

Life has not all been a bowl of cherries (what a boring thought!) but it has been good.

And somewhere along the line I have acquired wonderful friends who sent me all these flowers and more for my birthday!
Posted by Frugally challenged at 11:57 16 comments:

Head above the parapet

Blogland is lovely!  I've had a couple of emails asking if I'm OK and a friend whom I visit has also asked where I've been.  Sorry about the lack of posts.  Truth to tell I had a few days ill a couple of weeks ago and I'm just emerging from three days feeling pretty grotty but it's nothing serious and I just need to get my act together.

This post is just what it says in the title - putting my head above the parapet.  I shall doubtless be back properly before too long but at the moment I feel very tired.
Posted by Frugally challenged at 18:37 5 comments: