I Am In Disgrace!

He sorted my vegetable garden and tutted because I hadn't eaten all the leeks.  But that's not why I am in disgrace.

He planted some bedding plants and tutted because I had let one or two die.But that's not why I am in disgrace.

He checked on my car and tutted because I hadn't noticed that the glass had broken on one of the fog lamps. But that's not why I am in disgrace.

He wasn't very keen on the lemonade which I gave him which was far too "tangy" for his taste.  But that's not why I am in disgrace. 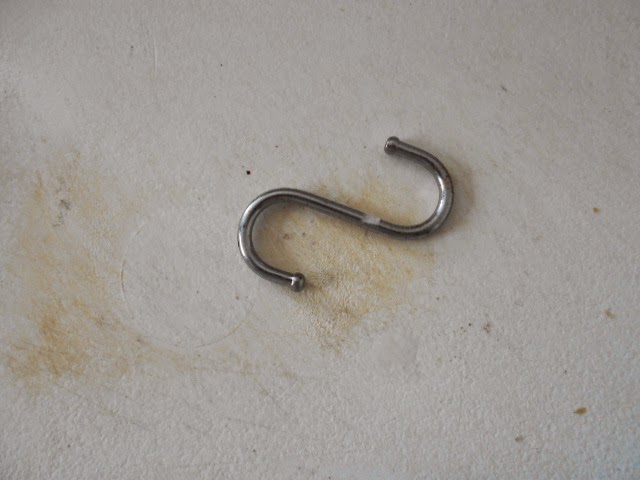 So what I have done?

I made some leek and potato soup for lunch and didn't notice that one of the hooks had fallen off my utensil rack into the saucepan and I had served it to him.

That's why I am in disgrace.

But he's promised to come back next week so maybe I have been forgiven.
Posted by Frugally challenged at 10:54 8 comments:

You can't have it all

The weather forecast this morning wasn't particularly good but I was desperate for the big wide world so off I went to Normanby Park. 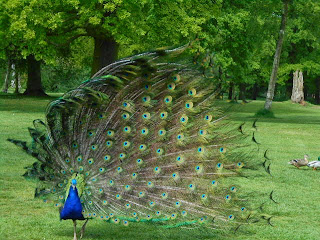 And it was a glorious day.  Soon after I entered the park I saw this splendid fellow. 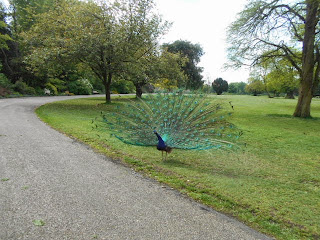 I see him or his mates every time I go there but this is the first time I have managed to photograph him displaying.

Wouldn't it be great to be a peacock with that wonderful outfit for everyday wear? 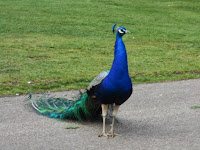 Well,no it wouldn't. I can't be the only person who finds the pantaloons vaguely ridiculous. 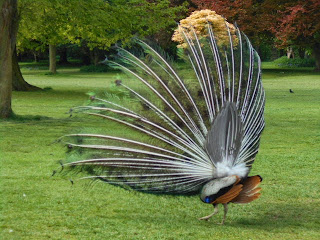 And as for fluffy bums - include me out!

Posted by Frugally challenged at 18:40 3 comments:

Email ThisBlogThis!Share to TwitterShare to FacebookShare to Pinterest
Labels: Days out, Normanby Hall

Last night I went to a charity "do" and like all charity events it involved a raffle.  I've organised many such events myself and I know that a request for raffle prizes is the cue for a rifle through last year's unwanted Christmas presents.  The stationery which looks great in the pack (but not so good with a letter written on it), the whisky marmalade (where the whisky ruins the marmalade and the marmalade ruins the whisky) and the lavishly packaged smellies are handed in with sighs of relief that at last the donor has got rid of them.  I know that's how it is; I've been the raffle organiser, I've been the recipient of unwanted presents and doubtless I've been the donor of other unwanted presents.  And far, far worse I've been the person carrying those "treasures" home again. 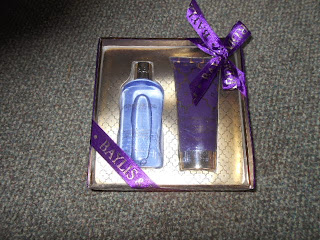 And that's just how it was last night.  I won this pretty parcel and I know I will never use it.  I like plain toiletries and lavender with cassis isn't a pong I want to have around me.  I'm trying to declutter my house so this package will not be finding a resting place in my home.


Instead it will be going to Romania.  A local charity takes all sorts of things from blankets to bubble bath and my smellies will be going out there.  I could have sent them to Women's Aid, or SallyAnn, both of which I understand would receive them gratefully.

And I've written a memo to self - don't give expensively packaged smellies as presents.
Posted by Frugally challenged at 17:34 5 comments:

While out yesterday I saw a man I hadn’t seen for over five years, a man from my last parish.  We greeted each other with a huge hug, but as I remarked to my companion “I am one of two women who married Steve on the same day.”

Posted by Frugally challenged at 08:17 8 comments:

Email ThisBlogThis!Share to TwitterShare to FacebookShare to Pinterest
Labels: Ministry

I may be some time.

I do enjoy a good moan.  I wouldn’t even dignify my moans by calling them rants.  Sometimes they are just chunterings, by which I mean I am at home alone, and I utter harsh words about “them” whoever “they" are.  The right to moan/rant/chunter is highly valued here at Frugal Follies.

And today I need to go a mere half a mile on my trundle truck to maintain my (moral) right to moan.  For today is Election Day. 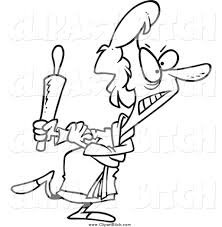 I have watched several of the election debates on the television and as I have watched I have moaned/ranted/chuntered at the TV set.  Although I have never been politically active myself I admire those who want to change things (or even those who campaign to keep some things the same).  The politicians at Westminster get paid, true, but the vast majority of those involved in the political process do so voluntarily.  They may want to change things so that they are better for themselves but at least they do more than moan/rant/chunter.

Believe it or not I have SEVENTEEN votes today.  One for Parliament, two for the district council and fourteen for the town council.  I shall use them all.

I may be some time.
Posted by Frugally challenged at 09:21 3 comments:

A Bit of a Shock

I had a bit of a shock today – in the nicest possible way.  At about half past eleven I phoned a childhood friend to arrange our annual lunch out.  She was lovely as ever but there was something in her voice which wasn’t quite herself.  We exchanged the usual pleasantries then she said, “I can’t talk long, I’m getting married at twelve o’clock.”  You could have knocked me down with a feather!

Jane is a bit older than me and I’m not exactly in the first flush of youth.  Her news took me right back to the first wedding I ever conducted.  There the groom was eighty and the bride seventy two, a bit older than Jane and her new husband. 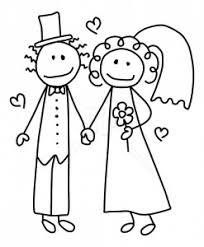 It is an enormous privilege to conduct weddings but I think it is one of the most stressful aspects of being a vicar.  Everyone wants the perfect day to happen and everyone has their own ideas about what the perfect day would be.  I often have a sneaking sympathy for those who go and tie the knot quietly and then let their families know what they have done!  Jane is lucky in this respect as older brides usually have more modest ideas about wedding days and they want to enjoy it rather than be a princess for the day.

I usually get several months’ notice that I will be conducting a wedding and as soon as I know of a new couple they are in my prayers.  Jane and her new husband will be in my thoughts and prayers too.

And so will the new baby who won’t just have a day of being a princess but a whole lifetime of it.  May she too know happiness and the blessing of God.

Posted by Frugally challenged at 12:29 4 comments: