I can't remember when I last had such a roller coaster of a month!

My dear friend Amy came to stay for a few days early in the month and as always we hardly stopped talking!  We went to The Deep, the wonderful marine aquarium in Hull and as always I was mesmerised by the creatures which inhabit our oceans.  I just love watching fish!  I took loads of photographs but they were uniformly awful so you won't be seeing any of them.  We also had a day at a spa which was wonderful. 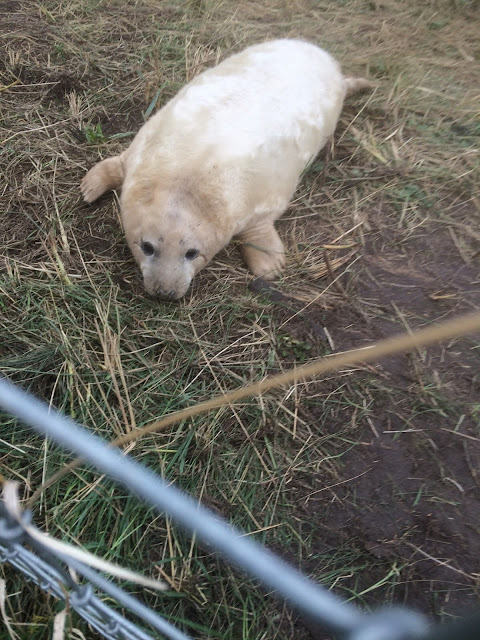 I had seven meet-ups for coffee or lunch.  I think everyone is trying to get  meet-ups accomplished before December!  Most of my friends will be spending December supporting their grandchildren at school plays and carol services, acting as taxi drivers, or as elves for Santa so early socialising with friends is essential if it's going to happen at all.

I had my annual visit to Donna Nook to see the seals.  It is the most amazing sight.  I never tire of seeing this mammalian maternity site.

The bathroom floor has been replaced, not good while it was happening but it now looks much better.

I've managed to get rid of quite a bit of "stuff" including a recliner chair so the house feels as though it has lost weight.  Plenty more still to go, though.

As I reported yesterday, I published my Kindle book.

The month has, however, ended badly.  An old friend's son phoned to tell me his mother's life will soon be over.  At one time we were very close and our friendship was still important.  I set out to visit her (it's at least a two hour drive) but about ten minutes from home I was in a road traffic accident.  Not my fault and no-one was hurt but I'm a bit shaky.  And I feel very sad as I won't see my friend again.
Posted by Frugally challenged at 14:43 2 comments:

You can find Teabreak in the Archangels' Restroom on Amazon.  I'd better come clean though - most of the material has been on this blog over the last few years.  I'm still quite excited though!
Posted by Frugally challenged at 18:23 2 comments:

Email ThisBlogThis!Share to TwitterShare to FacebookShare to Pinterest
Labels: A Pause in Advent, Teabreak

Would anyone mind if I have a moan?

I'm not a happy bunny.  That doesn't happen very often.

It's not been a good year domestically.  Back in March the kitchen floor had to be replaced.

So in May the kitchen was decorated.

And then the hall and dining room were decorated.

And while that was happening I discovered that the hot water tank was about to burst, so it was replaced.

And now I have discovered that the bathroom floor has to be replaced.  The stopcock has been leaking, probably for years and the floor is rotting.

Where are the tissues?
Posted by Frugally challenged at 21:14 9 comments: