I'm joining in with Pause for Advent at Tracing Rainbows and this year for Advent I want to look through the eyes of four different people.  We don’t actually know what any of them were doing for much of the time and we don’t really even know the name of today's person but we know that she must have existed for she is Mary’s mother, Jesus’s granny.  The Bible doesn’t mention her or her husband but there is an apocryphal gospel which says they were called Joachim and Ann so Ann seems as good a name as any and that’s the name I’m going to use during Advent.  Today it’s Ann’s thoughts from some time a few months before Jesus was born.

Mary, my Mary, how could you?  I always thought that of all my children you were the least likely to bring disgrace on the family.  And now you have done the worst thing you could.  I can’t believe it of you.

And you have lied to me.  You who were always close to me and we always shared secrets.  I thought you would tell me everything.  I didn’t know that there was a man in your life apart from Joseph, and even now you won’t tell me his name.  You just give me some silly story about an angel.  Angels don’t appear to ordinary people like us and angels certainly don't put girls in the family way!  Did some man deceive you with a holy story?  Was that it?

My first thought was that it was Joseph but he says it wasn’t.  Oh Mary, how much you have hurt him!  He’s a good man, he’d have been a good husband, but you can’t expect him to take on soiled goods and another man’s child.

Did we protect you too much?  I can’t think we did for you were always with the other girls of your age but their mothers won’t want them to be near you now.  I daren’t think what will happen to you.  There are plenty of men who will think you fair game and we can’t protect you for ever.

Your father is really upset and I can hardly get him to talk about it at all but Joseph came to see him yesterday.  Joe is such a good man, he’s trying to understand why you would betray him like this and he still loves you, despite everything.  He’s not going to expose you to public disgrace and make a fuss about breaking off the engagement but he’ll let it quietly drop.  That’s really kind of him and better than we could have hoped for.  But Mary, why won’t you tell us the truth about who it was?  The father should take responsibility.

I’ve been thinking.  You remember Elizabeth?  Well she’s expecting a baby too.  She’s only got a few weeks to go and I think she could probably do with a bit of help. You could go to her. No-one there will know you and you needn’t tell them you are an unmarried mother.  Elizabeth is a good woman and she’ll talk Zechariah round to letting you stay – he’s so excited that he’s going to be a dad after all these years she can twist him around her little finger!

Oh Mary, I’d always thought that becoming a granny would be so exciting and such a happy time, not like this.  I can’t forgive whoever did this to you.  He should be here with you.  It’s the father’s responsibility.

Posted by Frugally challenged at 04:54 11 comments:

Email ThisBlogThis!Share to TwitterShare to FacebookShare to Pinterest
Labels: A Pause in Advent, Stories

This has been a good week for getting out and about - eventually.  I say "eventually" because I had planned to go with a group of friends to Donna Nook on Tuesday but when I went out to the garage the trundle truck had a very flat tyre so my friends had to go without me.

I was SO disappointed as Donna Nook is one of my favourite places to go in November.  Looking at the scenery one might wonder why!  It is a bleak spot on the mudflats of the Humber Estuary and it is well littered with military warning signs for it is an RAF bombing practice area.

Most of the year it would not be a visiting place of choice but for two months in the late autumn it is a maternity ward for grey seals.  I find it amazing that they choose to give birth in such a place, often within feet of the viewing area.


I couldn't go with my friends on Tuesday but so Thursday (trundle truck repaired!)  I went on my own.  Over 1400 seals have been born this year and no bleakness, no military signs, no freezing cold wind from the North Sea, could could detract from my wonder and awe at this sight.


No matter how cold it is, some seals want to be even colder by sitting in the water like this cow.  Her pup was on the bank safely under her gaze.  His gaze was directed more at the human beings on the other side of the fence.


And I was delighted to learn that the military are sometimes involved in rescue operations for seals who find themselves in trouble!
Posted by Frugally challenged at 08:57 4 comments:

Email ThisBlogThis!Share to TwitterShare to FacebookShare to Pinterest
Labels: Days out, Donna Nook

A start to Christmas socialising

Sometimes Christmas feels like hard work - and sometimes it is pure joy!  I'm not waiting for 25th December for the joy - today I went to Newark and met up with my old school-friend Alice (Bobo's human, if you remember Bobo).

We've been friends since we were sixteen (which is quite a long time ago), and we can resume our conversation just as we left off.  Today we had decided that we would just meet for a very leisurely lunch at a village pub near Newark.  Three hours non stop chatter - the waitress was VERY patient! 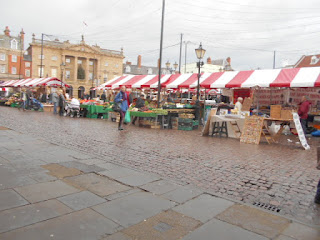 But before I met up with Alice I nipped into Newark market.  It is truly delightful and I bought some lovely fruit and veg. It's almost the sort of market I remember from my childhood but only almost, not quite.  There are still the cheerful stripy awnings, the stall holders still shout their wares, and the stuff still looks scrummy and wonderful. 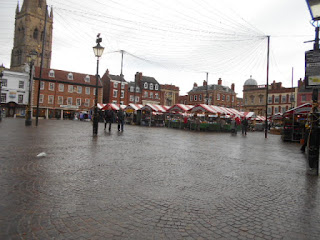 But there is one very sad difference.  Years ago this market square would have been full of stalls, just as it had been since mediaeval times.  Today, even on the busiest market day of the week, the square was half empty.

Whilst I was in Newark I rode my trundle truck over a rather bumpy pavement and the basket fell off the front, scattering my possessions, including my camera, across the pavement.  A women was sitting on a bench six feet away.  I unfolded my walking stick and got off and started to collect the detritus from the pavement.  A gentleman came dashing from the other side of a very busy road and helped me whilst the woman looked on.  Thank you, Sir.  And as for you, Madame, shame on you.
Posted by Frugally challenged at 18:30 2 comments:

Today wasn’t exactly a first but it was the first for many a long year.  Today for the first time in around thirty years I managed to make my Christmas pudding on Stir Up Sunday!

Just in case you don’t know why this is Stir Up Sunday here is the Collect for the Last Sunday before Advent from the Book of Common Prayer.

But I need to stir up more than a pudding.  I need to stir myself.  It's ages (nearly a month!) since I wrote on this blog.  I've been busy and there's been nothing wrong but somehow I needed a bit of solitude, a time of minimal communication.  I've commented in a few blogs but for the most part have kept my thoughts to myself.

Today I have no service to take.  I had planned to go to Brugges this weekend to visit my nephew but decided to postpone until the spring when I can be more sure that my eyes have properly healed.  My heart though is with all those in France and Belgium in these frightening times.  Later I shall be in a pew in church praying for them all.
Posted by Frugally challenged at 11:17 2 comments: 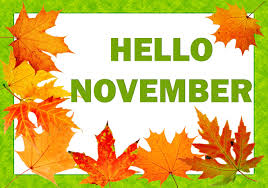 It's such an odd month.  I know a lot of people don't like it - after all it can be cold, foggy and wet, darkness comes so early, and the garden doesn't look anything like as good as it did just a couple of months ago.

But I love it!  It's the month when I get a lot of my Christmas thinking and preparing done quietly and in my own home. There's no sense of panic, just a joy in making things (or maybe even buying a few things!) chosen with care for people I love.  It's the month when the first chutneys have matured enough to be really good.  The first frosts mean that Brussels sprouts can be brought in from the garden.  Winter soups can be made and enjoyed with home made bread.  Sadly I no longer have a real fire but candles bring magic to my sitting room.

It's the month of glorious fireworks and lovely bonfires.  There's the poignancy of Remembrance Sunday but even then there is the beauty of simple village remembrance.  I know too that across the Atlantic there is Thanksgiving to celebrate.

And it's a whole new thirty days of hopes and possibilities.

(Just in case you haven't guessed my Sabbath was truly filled with joy.)
Posted by Frugally challenged at 07:15 5 comments: