My garden is free of weeds.

I have a bucket of newly dug potatoes.

The garden chair I bought three weeks ago is now assembled (and very nice),

The runner beans are in the freezer.

The vegetable bed is ready for winter planting.

Just in case you hadn't guessed - Jack's been.
Posted by Frugally challenged at 19:55 3 comments:

One of my favourite guests

I do like entertaining!  Opening my home to others is an enormous pleasure.  One of my favourite guests has been this last weekend and another is coming tomorrow.

My weekend guest was my little friend Jeanie, a sweet little girl of nine.  She's absolutely no bother.  She brings her own meals packed up and even brings a bed when she comes for a sleepover.  We rather enjoy having a cuddle in my chair and she has a little of her chocolate as a special treat.

Tomorrow's guest is male and considerably more gifted in years.  He's not here for a sleepover and we won't be having a cuddle.   He'll have me running around like crazy and the visit will be anything but restful.  Still, I think Jack will enjoy the sausages and the vegetables from the garden.

The third Friday in the month 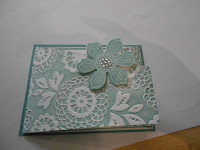 Once a month I go to Mandy's to make cards.  It's always a great morning out.  Mandy teaches us to make some wonderful cards and it's a good natter time. 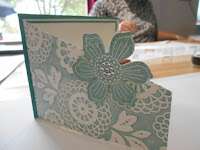 I thought this card was rather good and when the two front flaps are opened it would be good for writing one of those short notes which can make such a difference. 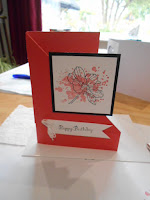 This one  also has an unusually shaped front made by folding back part of the card blank. 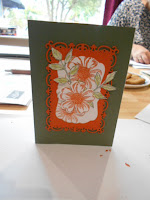 Something completely different here.  Lots of broken lines - a lacy edge to the die-cut orange frame and flowers and leaves which overflow the frame.  (Note the plate of biscuits in the background - essential for card making.  Honest.) 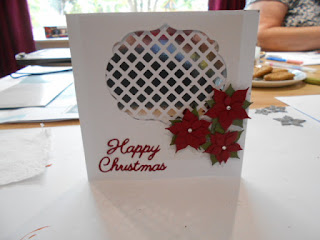 And finally my favourite of the four.  This was the most complicated to make.  The aperture was die-cut into the card and die-cut lattice work stuck behind it.  Some very shiny silver card is behind that.  The poinsettias are built up from several layers of die cutting and the greeting is also die cut.  Very lovely but very time consuming.  But it did mean I consumed only one biscuit.  Honest.
Posted by Frugally challenged at 18:07 6 comments:

Four years ago I behaved in a way that I never thought I would.  I booed at a sporting event.

Four years ago I won a pair of tickets to watch a session at the Olympics.  In my case it was an early round of badminton, a sport about which I knew next to nothing but it was a once-in-a-lifetime chance to see the Olympics so I boned up and went to London expecting a good evening’s sport.  When we got to Wembley Arena we found the tickets I had won were front row courtside seats.  Brilliant.  We settled down and as always when top sportsmen and women are playing, the matches were exciting.

But soon the atmosphere changed.  There was anger in the air.  The Chinese and South Korean women’s doubles pairs were on court and playing so badly that even I, walking stick in hand, could have taken them on.  Neither pair wanted to win as that would have disadvantaged them in the next round.  The same thing happened with the match between the South Korean and Indonesian pairs.

The crowd (including me) reacted.  The referee came on.  All four pairs were eventually disqualified.  Their behaviour was detrimental to both the Olympics and badminton.

I think the Olympics are great.  I hope that everyone competing and watching in Rio is having a great time, and that the Olympic ideal of sportsmanship is honoured.
Posted by Frugally challenged at 06:32 2 comments:

Email ThisBlogThis!Share to TwitterShare to FacebookShare to Pinterest
Labels: Comping, Days out

For me one of the worst things about disability is the realisation (or the fear) that sometimes other people feel they can't do what they want to do because I would be excluded.  I often make excuses rather than join in something when there is a possibility that I will hold others back.

Last week however, I got a pressing invitation to join with a Trefoil Guild walk and I am really glad that I allowed myself to be persuaded.  It was along the river bank near Brigg and I enjoyed it so much that I went back a couple of days later and did the "walk" again.

Isn't it wonderful how many really good projects have been funded with National Lottery money!  This project is the redevelopment of an abandoned canal-side path and will eventually be fourteen miles long.  We just went a couple of miles. 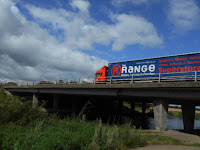 Part of the river is canalised and it was fascinating to see the twenty first century motorway thundering over the eighteenth century canal.

It's a wonderful leisure facility with luxury small craft on the water and dog walkers and runners on the path with both able to enjoy the wildflowers. 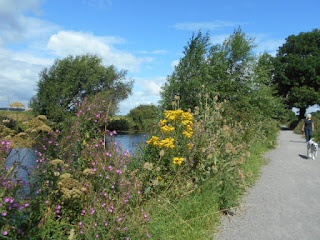 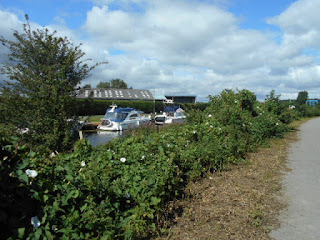 And just for once I wasn't the only trundle truck user!

Posted by Frugally challenged at 06:46 4 comments:

It seems a long time since I wrote about my family but during this last week I've been to the baptism of a cousin's grandchild and the funeral of another cousin's wife so my family has been in my thoughts quite a bit lately.


I've written very little about my Father's family and I know far less about them than I do about my Mother's people.  Oh I know names, dates of birth, spouses and all that, but that's not what knowing people is about.  I know so little of what they dreamed, what they were proud of, how they saw life.  I have no aunts or uncles left from that family so I shall never really know. 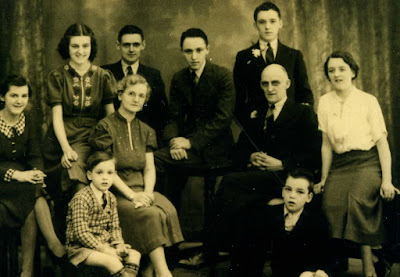 Father was the eldest of eight , born just over a year after his parents married.  Three more siblings appeared within four years and then Grandma took a little more time over having the other four!  My grandfather was an electrician on the local steelworks which would have brought in a steady wage rather than a large one, but  I think Grandma must have been a good manager as the family seems to have been secure and happy.  This is the only photograph that I have of all eight children with their parents.

I was one of twenty grandchildren in that side of my family!  Only thirteen of us still remain. I must talk to the other twelve about their hopes and dreams.  I've started to organise a family picnic for next year.  Watch this space!

Posted by Frugally challenged at 07:49 2 comments:

There's glory for you! 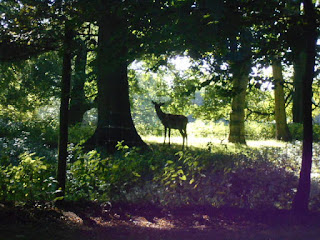 At the moment I'm trying to keep the car mileage down but yesterday morning was glorious so off I went to Normanby.  I almost didn't get there because a beautiful deer ran across my path but fortunately she made it across the road and I drove quite a bit slower for a while.


Then when I got to Normanby I saw this glorious sight.  I do feel privileged when I see deer this close.  They are such beautiful creatures!  Stags can look a bit fierce but the hinds look so gentle and vulnerable. 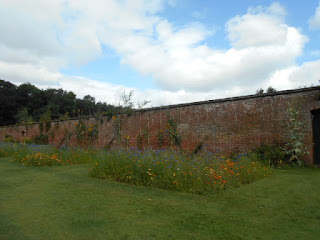 The park was full of children yesterday but fortunately my favourite bit is not appealing to the infantry.  I always enjoy the walled garden.  It's basically a vegetable garden maintained Victorian style with perennials and flowers (for cutting) bringing colour and enrichment.  They had a change of head gardener a few  years ago and I think the new one isn't very keen on vegetables.  These beds used to be filled with pumpkins which were then carved for Hallowe'en.  I rather like these new flowers though, so I sat and knitted.  There's glory for you!

Email ThisBlogThis!Share to TwitterShare to FacebookShare to Pinterest
Labels: Days out, Normanby Hall

In my time I've married enough men to set up a sizeable reverse harem for myself.  However I've married the same number of women!

Yesterday I married a delightful couple who have just come back from a few years travelling the world and they came back to her village to get married.  I love the sort of wedding where love and thoughtfulness are more important than money spent.  Yesterday was a glorious wedding.  Bride and groom were both relaxed and happy.  Each had learnt their vows by heart, a wonderful wedding gift to give each other.  The flowers in the church were from local gardens and arranged by their friends.  There is a talented organist living in the village and the music made my heart want to dance - my feet wanted to as well so dance I did - well jiggled around a bit.

Retirement means I can spend time with "my" couples, doing my part to ensure they have the most wonderful day possible.  They will be in my prayers for many a day to come.
Posted by Frugally challenged at 19:38 1 comment: