One of the most important things I have done during these months of isolation has been to scan all my old photographs.  It wasn't a quick job: apart from my own pictures I had collections which had belonged to my Grandmother, my Mother, and my only sister, Gillian.

I'm nearly nine years younger than Gillian and we were never particularly close.  She went away to college when I was only nine and although she came home for holidays and for her first year of teaching, things were never the same.  She married and had a son.  Sadly she was later divorced and had to make her own independent life again.

Back in 2000 she was diagnosed with ovarian cancer and was very ill,.  She spent a week on life support, a further week in intensive care and then a week in hospital before coming to stay with me to give her chance to recover.  For the next six months she lived with me part-time while she had chemotherapy but she managed to get better.   As she realised that she might have less years ahead of her than she had hoped, she decided to fulfil a few ambitions.

The first of these was to see whales in their natural habitat!  Our Mother was very generous and paid for me to go with my sister on a cruise from Vancouver up the coast of Alaska as Gillian could not have managed alone. (She was very disabled due to various other conditions.)   We saw whales!  We also had a whale of a time!

Gillian had cancer twice more.  The first was breast cancer which was caught very early and the problem was resolved by surgery alone.  The second, sadly, was a secondary from the original ovarian cancer and was incurable so I moved in with her for nearly a year to care for her.   It was a year when we were closer than ever we had been in our lives.

Gillian did one very important, but very sad, thing for me.  Because she got ovarian cancer (as did two of my cousins), I had genetic screening.  It was discovered that I have a faulty BRCA2 gene so I had surgery to minimise my cancer risk.  I will never know if cancer would have killed me, but I do know that I have far greater peace of mind than I would otherwise have had.  I am two years older than she was when she died.

Posted by Frugally challenged at 15:54 10 comments:

This one's for Jack

Jack is back in full force this year.  The garden is about to look magnificent and it looks pretty good now.

What I like best about my garden is the food we grow.  Here's a few of this year's crops. 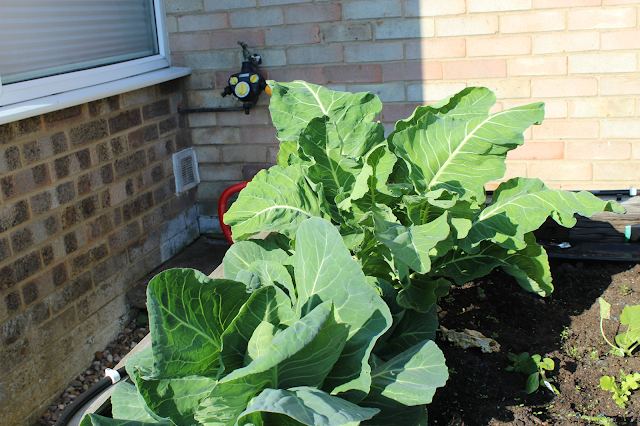 These brassicas have been growing quite a while and will soon be ready to be munched. 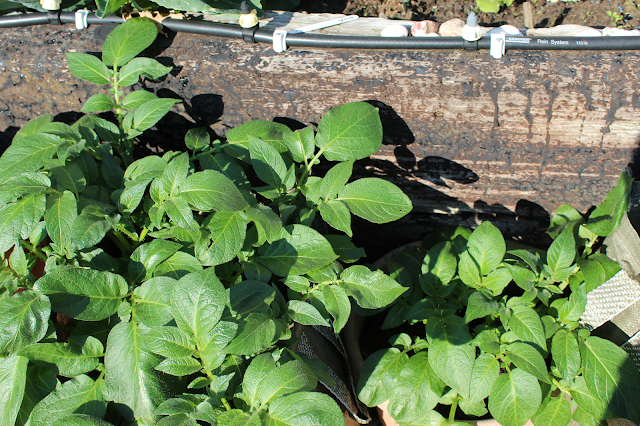 The potatoes are grown in pots so that I can harvest them when Jack isn't here.  They've really appreciated the wet weather we've been having.  We've grown Charlotte, Javelin, Maris Bard and Maris Peer. 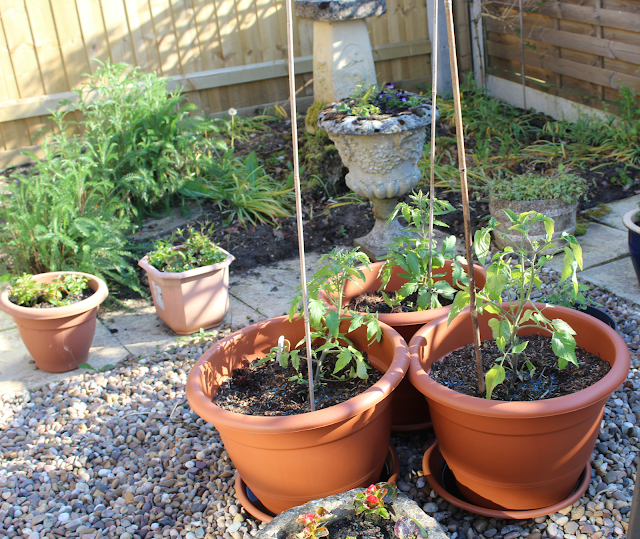 Tomatoes are also grown in pots.  Some are upright and some trailing.  My cousin gives me a huge variety and he doesn't know when to stop!  This group is a tiny part of this year's planting. 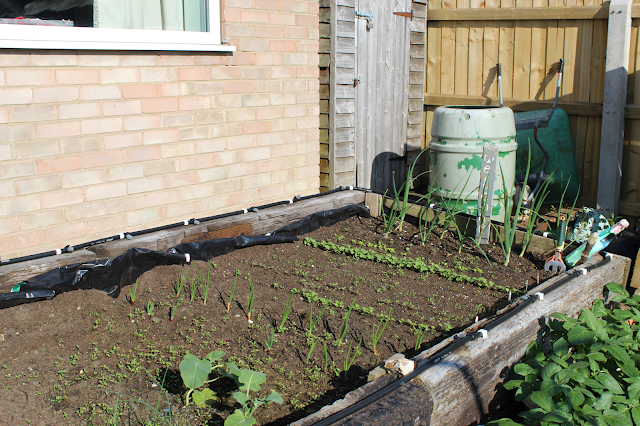 Most of the vegetables are grown in this raised bed.  We've got carrots beetroot, salad leaves, radishes, courgettes, beetroot, lettuce, and cucumber and probably quite a few more! 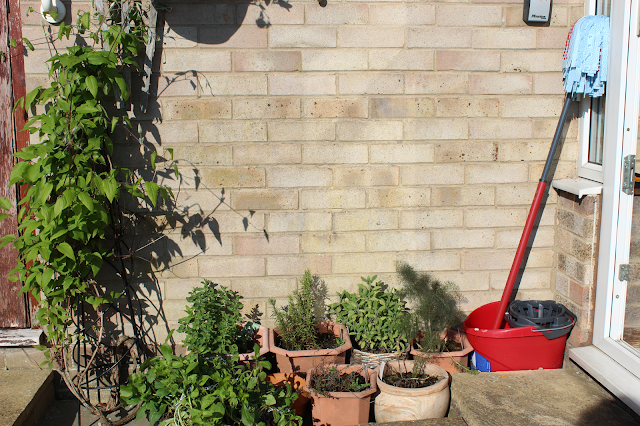 Herbs are grown in pots between the clematis and the back door so that they are handy for cooking.  It's also a handy place to leave the mop to dry!

Jack is definitely back!  My garden will be truly magnificent in a few weeks and it looks pretty good now.  We tease and bait each other but I am truly grateful for all that he does for me.

Posted by Frugally challenged at 05:30 8 comments:

Why do you wear that thing? 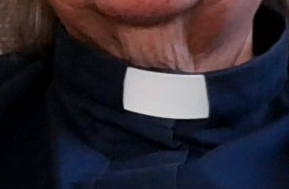 That’s a question children used to ask a lot when I was in the regular vicars.  I don’t wear it so much these days, but before I retired I wore it every working day.
It meant I never needed to introduce myself.  People recognised it as a badge no matter what faith they were or even if they had no faith at all.  Not all clergy wear them and what I write here is my own practice as not even all Anglican vicars have the same views as mine. There are no regulations saying we must wear it: the rules just say we must wear clothing suitable to our office: (Plenty of scope there, then!)  Many clergy never wear a collar and many are careful not to wear it in places where they may at risk.

Actually the collars I wear have to be worn with a special shirt, a shirt with a tunnel collar so that the collar can be slipped in.   There are other styles of collar and each demands a particular type of shirt The collar isn’t  the most comfortable thing to wear as it’s plastic and condensation collects under it in hot weather.  However, as it is plastic I can stick it in the dishwasher occasionally! 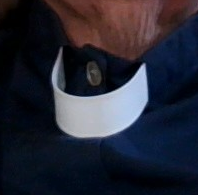 Mention of the dishwasher reminds me that it is far from unknown for clergy to make collars out of washing up liquid bottles, with or without “Fairy” printed on.

Posted by Frugally challenged at 10:52 2 comments:

I've been a very naughty blogger.  Or to be more accurate, I haven't been a blogger at all for thirty five days.  Thank you to everyone who has emailed me to check.  And I think thank you to Jack who has been nagging at me but I'm not so sure about thanking him for that.

I have no reason, not even an excuse so, if you don't mind, I'll stop grovelling and get on with a post.

I'll start with a couple of updates concerning my health.  First of all, I've had my second vaccination but as yet I haven't a blood test for antibodies.  I am still being very careful where I go.  I shop only early morning or very late evening, I won't go into cafes etc.  I am, however, making myself go out.  The infection rate around here is very low so the risk will be correspondingly low and I need to face the world again.

Secondly I have now seen a surgeon about my very dodgy knee and I will be having surgery fairly soon.  He said within a couple of months but I'm not holding my breath on that one.  A lot of people have had surgery delayed over these last fifteen months and I'm no longer in agony.  I want it to be done but I really don't mind waiting.  I've stopped my walking around the block but I have started to make more effort to lose weight and this year I have lost two stones (28 pounds) so I am very happy with that.  If I have to wait I will lose more weight!

Posted by Frugally challenged at 19:41 14 comments: