Thinking about decimalisation (see my last post) has made me think about the much  wider change in British society when we moved away from the old imperial measurements to the metric system.  The first thing I can remember changing was the way temperatures were expressed.  The old measurement was Fahrenheit but about sixty years ago we changed to Centigrade or Celsius, like scientists had been using for years.  We use Celsius for all temperatures now whether it's how hot an oven is or how cold a January day. 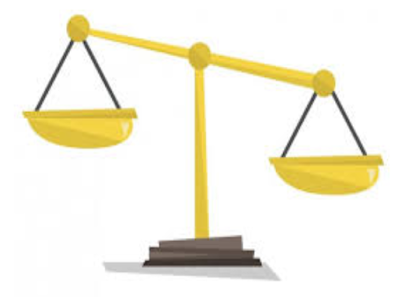 Distance used to be expressed in terms of inches, feet, yards, but there were other measurements too - as a child I learnt about barleycorns, chains, furlongs, fathoms and rods and doubtless many more which I have forgotten.  When I lived in Nigeria fabric was sold in fathoms and I still think of my feet as size 7, a size based on barleycorns.

Weights were another gem.  In everyday usage we had ounces, pounds and stones but there were also such wonderful units as scruples, hundredweights and quarters.  My Doctor now weighs me in kilos but I still think of my weight in terms of stones and pounds.

There is one very important exception to all this decimalisation - draught beer is still sold in pints.

And many Brits still think of things in feet, inches, pounds just as we have done for hundreds of years.

But I know of no-one who could tell me the weight of a scruple!

Posted by Frugally challenged at 17:53 20 comments:

Yesterday marked the fiftieth anniversary of D-day, or Decimal Day for British coinage.  And today I found this souvenir wallet of "new money". 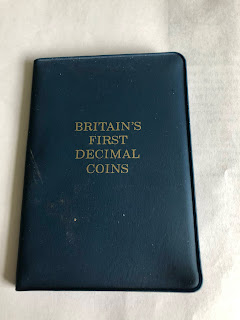 15th January 1971 was a Monday morning and that day I decided to buy a sandwich on my way to work just so I could try out the new currency.  The idea was to pay with a higher value note or coin in "Old money" (£sd) and to receive change in new pence.  Initially prices were in "np" but as the new money came into wider use the "n" was dropped and labels were in £ and p as they are today.

The changeover took about six months and was met with some resistance by older people but everyone had to use "new" money eventually. 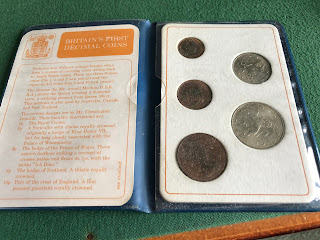 We gained simplicity that day but we lost things as well.  I remember paying for stuff with bobs, tanners and dodgers.  That's one shilling, six penny and three penny coins (or pieces) to many of you.  I can also remember recognising the appearance of the Kings and Queens of the United Kingdom because I had seen them on our coinage.

Our coins have changed since 1971.  The half pence piece and two-and-a-half pence coins are no longer in use.  The 5p and 10p coins we use now are smaller than those first decimal coins.

How long will it be before we no longer have cash?  I don't look forward to that day.

Posted by Frugally challenged at 11:22 9 comments:

Email ThisBlogThis!Share to TwitterShare to FacebookShare to Pinterest
Labels: History

As you may have gathered Jack and I compare notes on how many steps we walk each day. What he didn't say in his post is that it seemed that we each won on alternate days.  Anyway we decided to have a competition for a whole week.  I won't walk if it's slippery outside: he doesn't like the rain as his dog is rather low slung and gets messy.  As you can imagine there was a fair amount of goading going on both ways.

But today was the day to declare the results. 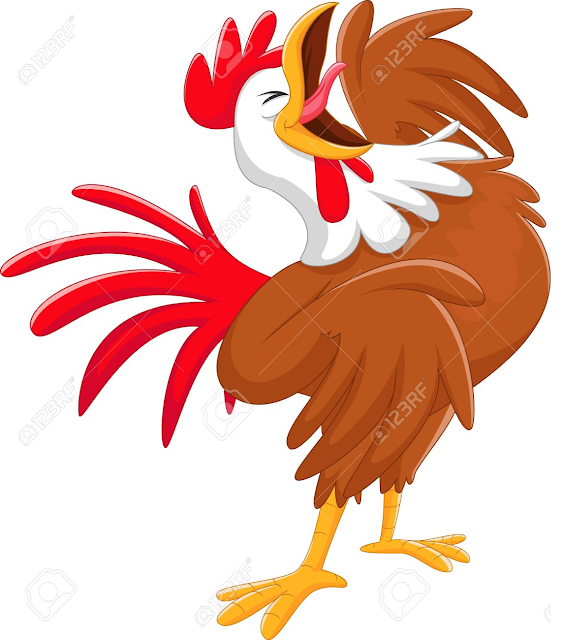 Jack has decided that the return match will be in June when he is working and I won't have a chance.
Not that he is a sore loser.
But he's a sore loser
Posted by Frugally challenged at 10:09 15 comments:

I hope you’re all keeping clear of the corona virus. 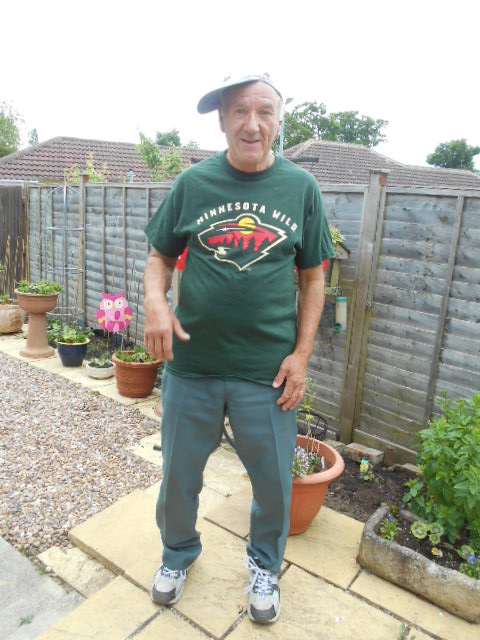 Well, I don’t know where to start!  First a big thank you for all the get well messages. It’s such a nice feeling to know that people all over the world are thinking of me.  Maybe we will meet up some time!  Maybe not in this life but somewhere else when I hope I can seek you out personally and thank you for your kind words.
I’m sorry to have to say this (because you all think my friend, the vicar is sweet and angelic) but she’s been getting out of hand recently.  She’s become competitive and outspoken and it just won’t do!  We each have one of those step counters and she takes great delight in telling me she’s done more steps than me most days.  That’s fair enough, but on the odd occasion I do more than her she stays up and walks around the house until she gets more than me!  What a poor loser she is!  I said couldn’t she just once accept defeat gracefully and let an old man (me) have a little pleasure now and again?  After all, I’m 78 and in the last quarter of my life on this planet.  I’ve told her I’m going to live to 103 years, 2 months and 3 days.  I’m living for two since my wife passed away.  But no, she has to win and to top it she rewards herself with chocolate.  The vicar has one of those Alexa things and it even reminds her to order chocolate.  Technology’s gone made these days.

I have two females in my life and both of them get an enormous amount of pleasure waking me and making me get out of bed in the morning.  One’s a human – I think!  That’s the vicar (she phones early).  The other is my little dog.

The other morning I asked the vicar if we could observe a minute’s silence which we did, but asked why?  I told her I’d just finished my 5th loo roll since the pandemic began.  Also, this year the vicar is keeping count of how many baths I have.  I allow myself 28 baths a year.  With the vicar’s help I’m doing quite well.  She suggested that if I had one on New Year’s Eve I could count it as both 2020 and 2021.  What a clever girl she is!  But I couldn’t manage without our phone calls each morning.  She’s pulled me through some rough times.  Thank you, Vicar!

If things don’t improve step-wise with the vicar, I could do with some suggestions of how to sort her out.  I can’t let her have the upper hand all the time: she’s becoming uncontrollable.

I hope this post has brought a smile to you all as brining a smile does my heart good.  Please take care of yourselves and don’t take risks.  If the vicar lets me, I shall post again soon.

Posted by Frugally challenged at 10:47 6 comments:

It's 327 days since I decided it might be prudent to withdraw into my little bungalow.  Soon after we had our first lockdown and we're now on lockdown three.  It feels different.   It no longer feels unfamiliar, just boring. 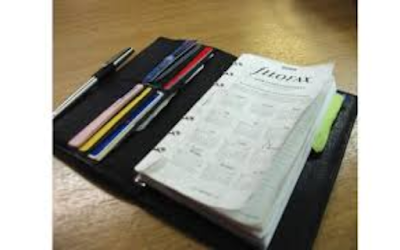 One thing I noticed during 2020 was that I didn't know where my Filofax was.  I just never needed it!  Back in March I cancelled all my appointments and I hadn't made any more.  It was like the early days of retirement when time seemed to stretch to infinity and the only thing to be decided was whether to have my main meal in the evening or at midday.

Somehow, though, the "feel" of my seclusion is changing and my diary is again close by my side.  The days are becoming distinguishable now.  Mondays I have a zoom coffee with a friend.  Friday I do a Denman on line craft course.  (Denman is part of the Women's Institute.)  I have a fortnightly knit and natter.  A gas engineer is coming to do routine maintenance.  Somehow more structure is happening, appointments are being made, so the Filofax is needed.

And I am having to adjust again.  My seclusion isn't likely to end for quite a while but when it does I will again need to fit in my activities with other people.  The Filofax will be important and maybe it's good to get used to walking in step with others again.

Posted by Frugally challenged at 11:40 7 comments: