Move over, Paddington.  Pudsey is top of the pops this week.  He's on a 470 mile rickshaw trip from Jedburgh to London.

UK readers know exactly what I'm talking about.  Pudsey is the figurehead of Children in Need, the BBC's annual campaign to raise money for (surprise, surprise) children in need.  Some is spent in the UK, some overseas but since 1980 it has raised £600 million through its annual campaign.  For several years now Pudsey has been transported around the country courtesy of young cyclists who have themselves been helped by the charity and who cycle power the rickshaw as others collect from the crowd.  The "Grand Finale" will be on Friday with a telethon when the money rolls in. 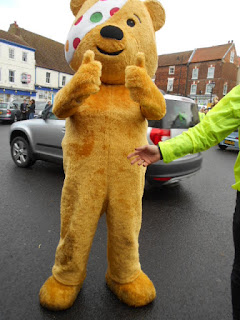 Anyway, today Pudsey came to Caistor and it would have been rude not to welcome him.  The town turned out in force. 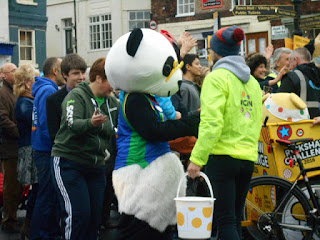 Big Pudsey came first and I have to say, he's a bit of a poser.  He had competition from a panda who is the mascot of our local running club.  Panda rarely meets a bear of his own size in Caistor so it was a treat for him. 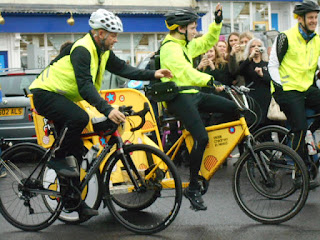 Soon the shout went up - the rickshaw was on its way!  A young lad called Ross was powering the bike while little Pudsey reclined in the back.    There's an incredibly large support crew but Ross was the star in Caistor.  He got loudly cheered (we'd been primed as to his name)  but all too soon the circus moved on, the crowd dispersed and this resident came home glad she'd sat in the cold and cheered.

Posted by Frugally challenged at 20:14 4 comments: 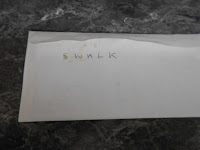 It's not often I get a letter with this on the back nowadays.

Even then it's not often I would share the contents of such an envelope on this blog.

But it was a letter from Jack and he wants to communicate with all of you.  So "SWALK" may be for me, but it's just to sweet-talk me so he can get onto my blog.

Hi Everyone!
Yesterday I went to one of my favourite places!  Yes, it was to see the vicar.  I was later than usual because I had been for an eye test.  I was amazed to be told that my eyes hadn't changed in my last three visits - what good news!  Anyway, as usual a Haddon Hall pot of tea was on the tray and as we drank plans were made for the day.

It was decided that I would go to see Auntie Hettie first as the vicar had guests coming around 10.30 so off I went.  I would be back for dinner.  Auntie Hettie hadn't been too well  for a day or two but she perked up when I went into her room to say hello.  I always take Hettie a book to look at.  The one today was about old country cottages which I know she will enjoy.  Carrie, her daughter (who looks after her mum) told me what needed doing.  To look after someone full time takes a lot of doing so a big well done to Carrie and all other carers doing the same thing. I take my hat off to you.

I've been doing the garden for them for a few months now.  I've already made a patio where Hettie can sit when she is well enough.  I fixed the garage door so Carrie can open it unaided.  We put her guinea pig cages in it for the winter and then, after pruning the roses, it was a cuppa in the kitchen for me.

The garden is very large so I will be going for a while yet.  It's near a small road and lots of people walk by and I have a lot of banter with them when they are  passing.  Dinner time was approaching so I went back to the vicar's.

Just before dinner I started to take out a shrub in "my" part of the garden.  It had outstayed its welcome!  What a hard job it was!  It had got around an old tree stump with its roots entangled in it.  I lost a lot of sweat doing this before I was shouted in for dinner.  We had gammon, baked potato, broad beans, carrots, sweet corn, broccoli and (best of all) onion sauce which she had made.  Just one thing spoilt it - my first bite into the broccoli just about broke my teeth.  I didn't like to tell her it was frozen so I said it was a little cold.  Dinner wouldn't be the same if everything was perfect.

After emptying the fountain, digging out the rest of the shrub, planting some hyacinths, moving some boxes into the kitchen, moving the hanging basket stand and the bird table, and moving some of the many pots and tubs with flowers in so the vicar could admire them from the house during the winter it was 3.30pm, time I was going home to my wife who is suffering with her back at the moment.

I must tell you all before the vicar does - I am going to Malta for a month to get some sunshine.  I'll still be thinking of you all.

Rambler Hope your mojo is back.  we've now got a shi tzu - she's a bundle of joy.

Mamas Mercantile   Thank you for your kind words.  I'm often around Mablethorpe and Skeggy so watch out for me.