I regret to say that once again I am not having a good week.  Sorry to burden you with this but that's how it is. 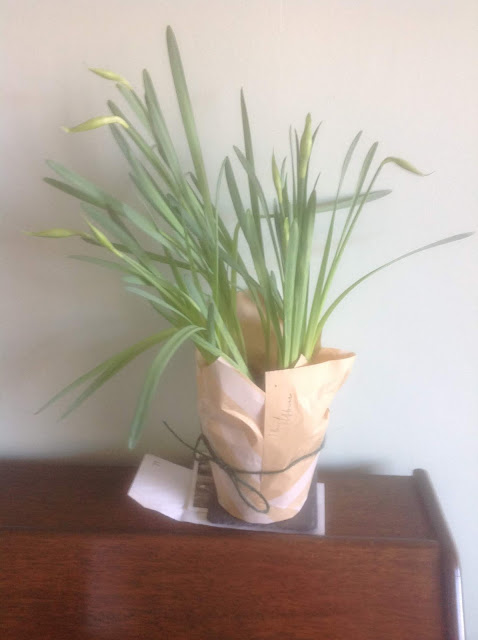 Once again I have electrical problems which are probably something to do with last  Sunday's storm.  I won't bother you with the details but suffice it to say that I've parked the freezer in the middle of the kitchen because I am so fed up with moving it to a working socket and putting it back every time there's a problem.  Yet another electrician is booked.  (Someone has already been to make sure all is safe but the on going problem has to be resolved.)

My other problem started well before the storm.  My broadband connection drops out repeatedly.  This means that I can't get my subscription channels on TV.   (I can still get Freeview)

But I've called this post Random Acts of Kindness.  I think that's one of the loveliest phrases to enter our language in recent years.  (Another is "paying it forward" - much better than feeling we need to pay back.)  Yesterday I was on the receiving end of such an act of kindness.  As you can see these mini daffs aren't quite out yet so I will continue to enjoy them for a while to come and then they will be planted in my garden. So much joy!
Posted by Frugally challenged at 15:02 12 comments:

The Ghost of Storm Ciara.

My armchair was so comfortable.  I fetched an extra throw and curled up as I listened to the storm raging overhead and felt grateful that I didn't need to go out again.

But from somewhere in the house I could hear a slow, ghostly drumbeat.  Eerie.  It needed investigation.  It seemed to be coming from the kitchen so being a brave woman I went through and waited for whatever apparition would come.  The drumbeats ceased.

I returned to my sitting room and relaxed but a few minutes later there it was again.  Drum.  Drum.  Drum.  My nerves were now on edge.  But I steeled myself.  I'm stronger than whatever "it" was.  Back to the kitchen and my lonely watch.

I nearly jumped out of my skin when again the drumbeat came.  Something had a cheek in doing its ghostly thing while I was there.

But when the next beat came I had to giggle.  Water was coming in over a window and dripping on to the lid of a Tupperware box.

Which may or may not explain why the electrics again failed yesterday.  But it is my explanation for the G & T I then consumed.
Posted by Frugally challenged at 08:38 7 comments:

The last Friday of each month always brings a particular pleasure - going to Mandy's to make cards.  So here is last week's haul.

Posted by Frugally challenged at 07:23 4 comments:

I feel as if I've had a lovely month but when I look back over January it looks a pretty awful thirty one days.   It started with a disgusting cold, meandered through problems with electricity. broadband, heating, and drains, veered off to the garden for a fallen fence then rapidly back indoors for a dead freezer and finished with a bruised face, the result of being attacked by the kitchen clock.  As I write all that it sounds like a catalogue of disasters.  I deserve sympathy.

But thank you very much, I don't need sympathy.  There has been so much joy!

The first snowdrops, primroses, and daffodils.  Wonderful soups and stews.  The kindness of someone saving a nearly new rollator for me.  Meals and coffees out with friends.  Joyful worship.  Trying a new craft (glass etching).  Great service from my landlord.  A ninetieth birthday party.

And through everything the kindness and support of others.  Truly I feel I can look back over a wonderful month.
Posted by Frugally challenged at 07:08 9 comments: