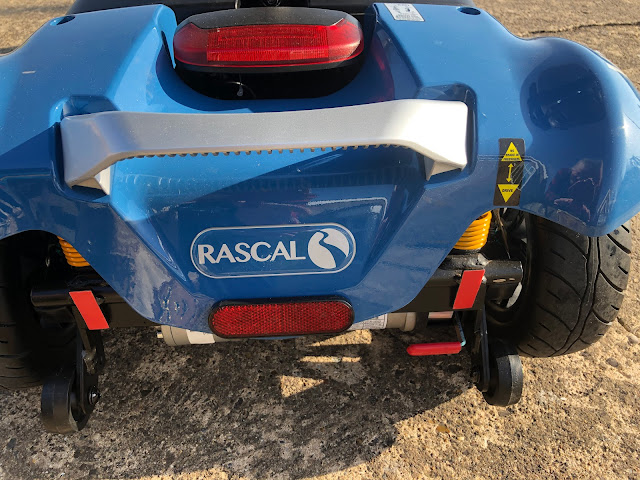 No, I'm not talking about Jack today but rather about the new Rascal in my life.  I hope Jack doesn't get jealous!
For the last twelve years I have used a Trundle Truck or, if you use official terminology, Mobility Scooter.  My TT means freedom to me so when mine became very unreliable, I had to have a new one.

So, forward The Rascal Vista.  Like all scooters, it is quite an expensive bit of kit, so I am deeply grateful to the many people who, over several centuries, have given money for grants to help elderly clergy in the Diocese of Lincoln.  Many of them would never have seen a trundle truck ever but I hope they would be glad to know that they have given freedom back to me.  I've never applied for charitable funding before (I've always seen myself as a giver rather than a taker) but a scooter which suits my needs is around £2000 and I need a new one every 5-6 years so I decided to go for it. 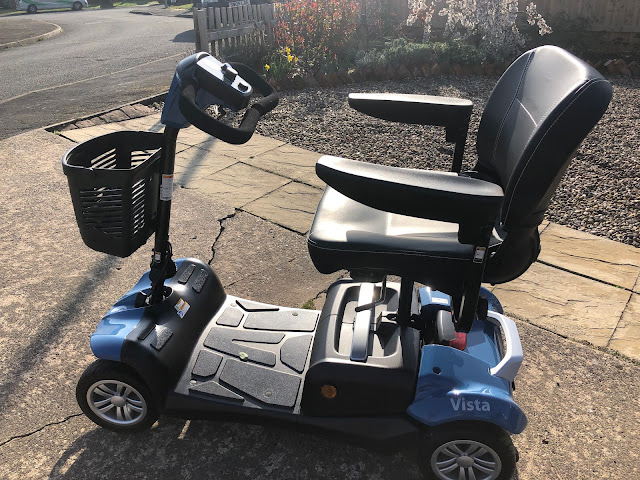 And it is wonderful!  I've been shopping this morning without any fear that I would be stranded if the trundle truck broke down.  And I am able once again to plan days out this summer.  Fantastic!

Posted by Frugally challenged at 09:41 15 comments:

Hello to all of you!  I hope you are all keeping well.  Today I'm writing about some of the things which keep me, a fairly active seventy-nine year old male, in good nick.

So first, some people (i.e. my friend, the vicar who copies and edits whatever I write) don't always approve of what I eat.  For example, what's wrong with having a salad with coleslaw and Rice Crispies on top to embellish it and make it look nice?  Or porridge, which I have every other morning?  "Nothing wrong with that", I can hear you saying,   "Porridge is very good for you".  But (wait for it) I like it with barbecue sauce on top to enhance the flavour.

The last time I went to the vicar's we had homemade leek and potato soup and bread buns but no butter as I had forgotten get any from the supermarket on the way.  I got a stern reprimand from the vicar.  Anyway, the vicar asked if I would like yoghurt on the soup.  I was aghast because her soup is the best I have ever tasted so why spoil it by putting yoghurt in it?  I don't mind metal hooks which I get from time to time with it but I think she must have shares in a dental practice and she gets 20% commission every time she recommends them.

It's not very often I have to cook for myself.  I'm one of the luckiest people around.  My neighbours and lots of other folk are so kind to me, feeding me and giving me stuff.  The vicar says I'm scrounging.  No I'm not!!!  I might comment that something looks or smells good if someone is cooking or baking.  I get pies and meals given to me so I don't often have to cook more than once a week.  God loves a tryer and I'm certainly that.

I pay people back in many more ways, the most important being that I spend time with a lot of lonely people and after a couple of hours I've lifted their spirits and cheered them up.  I hope even the vicar will agree with me on that.

Posted by Frugally challenged at 14:10 4 comments:

This appeared on my Facebook feed this morning.
In the late 1930s-1940s, Michael Bond, author of Paddington Bear, saw Jewish refugee children (Kindertransport children) walking through a London railway station, arriving in Britain escaping from the Nazi horrors of Europe. Mr. Bond, touched by what he saw, recalled those memories 20 years later when he began his story of Paddington Bear. 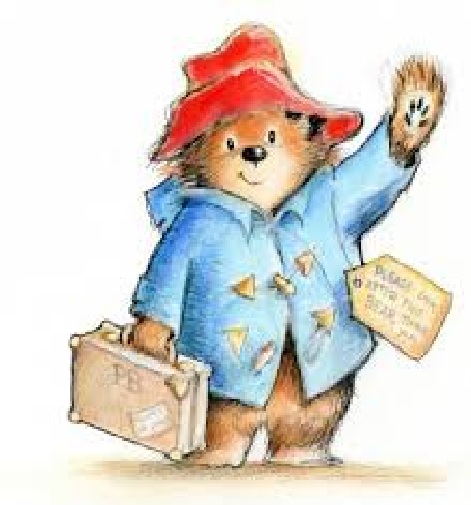 One morning in 1958, he was searching for writing inspiration and simply wrote the words: “Mr. and Mrs. Brown first met Paddington on a railway platform…”
“They all had a label round their neck with their name and address on and a little case or package containing all their treasured possessions,” Bond said in an interview with The Telegraph before his death in 2017. “So Paddington, in a sense, was a refugee, and I do think that there’s no sadder sight than refugees.”
Paddington Bear - known for his blue overcoat, bright red hat, and wearing a simple hand-written tag that says “Please look after this bear. Thank you,” Paddington embodies the appearance of many refugee children. His suitcase is an emblem of his own refugee status. “We took in some Jewish children who often sat in front of the fire every evening, quietly crying because they had no idea what had happened to their parents, and neither did we at the time. It’s the reason why Paddington arrived with the label around his neck”.
Michael Bond died at 91 in 2017. The epitaph on his gravestone reads "Please look after this bear. Thank you."
Please look after all the young Bears in Ukraine
Posted by Frugally challenged at 10:03 8 comments:

. . . ago on 11th March 2020 I decided my life  had to change.  News of a highly infectious virus caused me to withdraw from many things and instead to live in a new way entirely within my own home.  Like everyone I had to accept regulations like nothing we'd seen before in my lifetime.  The world became a worrying, almost frightening place and my home was the best place for me to be.

Within my home I sewed, cooked, knitted, read and did one hundred and one other things while others, far more capable than me waged war on that virus.  And I sat at home and sewed,

Today another war is being waged and it involves hatred and deliberate killing.  Restrictive regulations are the least of the worries being faced by the people of Ukraine.  And still I am safe in my home.

I am just as helpless.  All I can do is pray and help in fundraising.

So I have used one of the sewing skills I developed in that war on the home front to make a wreath of sunflowers, the national flower of Ukraine, to be raffled off at a coffee morning tomorrow in aid of humanitarian relief.
It is so little.  God bless the people of Ukraine.
Posted by Frugally challenged at 15:50 8 comments:

I'm not allowed to tell you how old he is, but if you look back to this post  of a year ago and do the maths you may be able to work it out. He came last week and left this post with me so he's been very disgruntled that I hadn't put it on the blog for him but I always planned to do it today.  Sneaky or what!

Today it is with great anticipation, trepidation and gratification (that's a lot of "ations") that I am visiting my friend the vicar.  It's my first visit since before Christmas and I've been informed that there's a list of jobs waiting for me.

Since my last visit I have become another thing for the vicar: not only am a horticultural enhancer (that's her posh word for a gardener) but also her personal shopper.  Before I even arrived at her house today she had already texted me a list of things to pick up from Lidl on my way.  One of the her best talents is for writing lists.

Also today (just for a change) I've got gifts for her.  If she's good I will maybe buy her a bunch of flowers while I'm at the supermarket.  If she's being good there won't be anything untoward in the lovely soup she gives me at dinnertime (or lunch if you are posher than me!).

Well, I hope you're all keeping clear of covid.  Unfortunately, I succumbed to it.  I isolated for ten days.  My poor little dog wondered what was going on.  No walkies!.  Luckily the vicar and I ring each other every morning and the banter between us is great.  I look forward to those twenty minutes or so and I hope the vicar does as well.  She gets immense pleasure telling me she's done one or two walks before me.  Another bone of contention is that she's always giving me stick about my hair or lack of it but don't worry, I'll get my own back before too long, you mark my words.

I hope you haven't suffered because of the weather (storms and floods and all that.  My heart goes out to all those people who suffered losses to life and property.

Well, take care of yourselves.  Keep smiling (and I know this is a bit late) but Happy New Year wherever you are.

Posted by Frugally challenged at 06:41 9 comments: