This is a post I’ve waited four years to write.

You may know that I went to see The Vicar last Friday.  What you don’t know is what went on!

On arriving at The Vicar’s house at 6am I jumped out of my car, looked towards the window and there was a vision of beauty, this epitome of youth with a smile from ear to ear and her hands clasped in front of her as if giving thanks to The Boss.  I ran towards the window –no, I can’t go on any longer.  I promised to tell the truth so I’ll start again.

On arrival at the house I staggered out of my car and looked towards the window and was surprised to see The Vicar standing there.  After all it was 6am, she was in her dressing gown with her hands clasped – that bit was right.  I think she was smiling but it could have been wind problems.  I sauntered to the window and put both my hands on the pane and asked her to do the same.  Something fell out of her hands – it was a list of jobs she wanted me to do and I’d been thinking she had been thanking The Boss that I had turned up!  How wrong I was!  After four years nothing had changed and I’m so pleased it hadn’t.  It was indeed the return of the prodigal.  We had hands on glass touching although it would usually be hugs all round.

I made my way to the back garden and what a shock I got.  I turned round and went back to my car.  The Vicar thought I’d done a runner. I wouldn’t do such a thing.

Now any normal person who was visiting a very dear friend for the first time in four years would bring a bunch of flowers.  Well, Jack may be a lot of things but as The Vicar will tell you he’s anything but normal.  I rolled up with a bag of potatoes, carrots and a leek, a Solomon’s Seal (plant), a new catch for the gate and a Dyson vacuum cleaner.  What else would anyone expect?  She wanted to borrow my spare Dyson whilst I checked her’s because it wasn’t working too well.  She’s had it twenty five years although it doesn’t get used much.  Don’t tell her when I get it working better that all I did was empty the dust bag.   She’ll think I’m a genius so don’t mention the dust bag.

Back to the garden or maybe I should call it the jungle – I’m sure I saw a tiger in there.  Actually it was the ginger moggy from next door.  I knew this was going to be a very tiring day for us both.  The Vicar gets very tired watching me.  I would never let my friend down.  She’s done so much for all my family.

After many cups of tea and three hours work you could at last see where the garden was.  Another hour was spent digging it all.  I put in six trailing tomato plants in tubs.  Next came snapdragons and mesembryanthemums.  I made a fence panel safe, put the new latch on the gate, and planted the Solomon’s Seal in my part of the garden.  I tidied the back garden and made the patio area presentable so she could admire the view and enjoy the garden.

We kept our distance from each other.  I made full use of that because I said things and pulled her leg knowing she couldn’t clout me.  I forgot to mention that with all the tea I knew I would consume there could be a problem but we sorted it between us with the help of a bucket and the garage!  She also brought out a bowl, soap and a towel so everyone was happy.

It got round to dinner time.  Now I’m always wary of meals at The Vicar’s.  Over the years I’ve had some funny stuff served up to me but I must confess that The Vicar or Mary as you all know she really is, had worked hard.  She’d made carrot, parsnip and sweet potato soup followed by sandwiches made home cooked ham on home-made bread.  She also sent me home with a home-made loaf of bread,

When I got home I did three loads of washing and cooked some ham as well.  I put in some seeds which Mary had given me.

I would like to thank you all for your kind words about Mrs Jack and about me as well.  Your comments make my day extra special, I’ll blog again soon.

Remember, aspire to inspire before you expire

All my best wishes to you all. Jack X X

Posted by Frugally challenged at 11:59 10 comments:

“To those who gave so much, we thank you.” 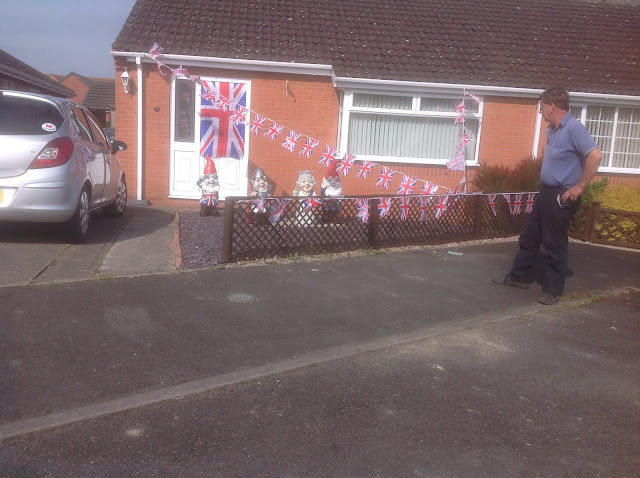 I've just been to stand for two minutes outside my house and remember all who "did their bit" to make for Victory in Europe in 1945.  This afternoon I shall go outside again and join with my neighbours for  a stay-at-home tea party at 3pm.  This road and the next (which is also a cul de sac) have each come to a consensus that we will celebrate quietly but publically with scones, jam and cream (everyone brings their own) and a cup of tea or glass of fizz.  I've never been to a celebration like it and I'm rather looking forward to it.

Here's a few local homes.  Sorry the photos are even worse than usual!


Posted by Frugally challenged at 11:58 5 comments:

First of all I know I am very "lucky".  I'm putting lucky in inverted commas because part of my "luck" is that I have no family to worry about.  I live alone and whilst I have cousins and a  nephew I know that it's much more difficult for people who can't get their usual hugs from children or grandchildren in other households.  I miss my regular hugs too though!

Being isolated is not so different from my everyday life. I have long had about four days a week when I have no face to face conversation so I know how to manage that.  My income is more assured than many - I'm not able to earn much extra money now but my pensions are fairly safe.  But quite apart from that I have found some sources of joy.

Each week I have been out to clap for carers as do most of my neighbours.   We live on a quiet cul-de-sac so we all go out into the road and it's also the weekly chat.

I've been gently busy at home.  My main project during lock down has been scanning and sorting photographs.  I want to get photobooks printed of the stuff I judge to be worthwhile.  I've set aside various packs of photos for other people, especially cousins, if the pictures are relevant to them but the vast majority have gone in the bin after scanning.  Many weren't even worth scanning.

I have bought plug plants and brought them on ready to plant in my garden.  It also means that Jack has even more to moan about!  He likes that!

I was sad and disappointed not to take the funeral of Jack's lovely wife but we will sort something which will happen later.  I've also been sad at another death where I would have taken the funeral and at the impending death of someone else.  The awkwardness of final illnesses and bereavement at the moment has caused extra anguish for many

I've been improving my digital skills and have been having video calls every evening with my cousin's wife.  I find that comforting as someone would know if something has gone wrong.  I also make quite a few calls each week to other people who may be alone and/or struggling.

I've been inspired and amazed by Captain Tom!

And I've enjoyed reading blogs.  Thanks!

Posted by Frugally challenged at 11:06 5 comments:

I am in disgrace and it's lovely!

It's been the sort of day that I dread and yet dream of.  It's the day that Jack came to sort out the garden.  (In case you are worried we maintained correct distancing and he didn't come in the house.)

I had warned him that it was dire. But he seemed not to have taken my warnings on board.

Here's how it was. 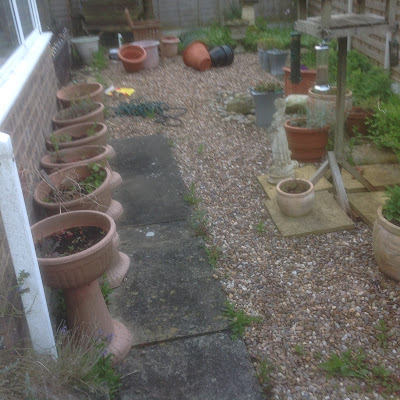 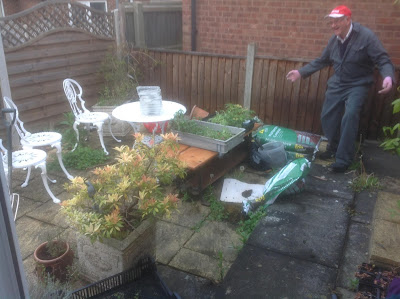 And here's how it looks now. 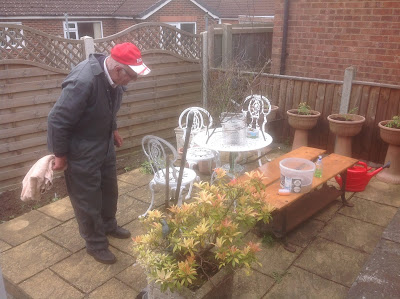 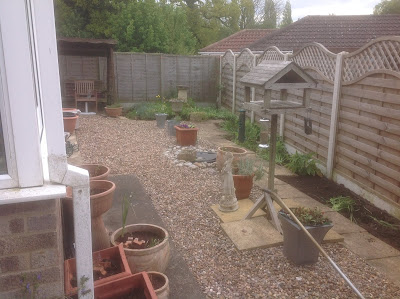 Before he tells you what a disgrace I am I will say that I was ready when he arrived at 6am, that I kept him well supplied with cups of tea, that I gave him home made soup and also sandwiches made of home made bread and home cooked ham.  And there were no hooks.

And he went home with a loaf of home made bread

He
Posted by Frugally challenged at 15:49 11 comments: