Today has been a day of thankfulness.


It started this morning when I celebrated the Eucharist at a new-to-me church at Usselby.  St Margaret's reputedly dates from  the fourteenth century but you'd never guess that  from the outside.   It was "modernised" in 1889 and the modernisers did it no favours on the outside but inside it has real charm.  Modernised is a comparative word though as this very rural church has no electricity.

Did you know that "Eucharist" is derived from a Greek word meaning Thanksgiving?  Celebrating the Eucharist was a good way of starting my day of special thankfulness to God.

Then this evening I led worship at the Harvest Thanksgiving at Thornton Le Moor.  As I've said before this is another church without electricity but we had a good organist on the harmonium and we sang our thanks to God enthusiastically.

And today has been a day of quiet private thanksgiving too for on this day in 1990 I knelt before the Bishop in Leicester Cathedral to be made a Deacon.

Posted by Frugally challenged at 20:33 10 comments:

Otherwise known as That Was September That Was. and Here's What I Hope For October

September was quite refreshing in that the extreme heat (by local standards) of summer 2018 was over and activity became possible again. I did quite a bit.

I undertook watering someone else's garden for a week.
I went to a crochet group three times and made a start on a ripple blanket.
I went to to two Women's Institute meetings and two Trefoil Guild meetings.
I baptised a giggling baby girl, led worship on three Sundays, conducted a harvest festival and one funeral.
I had six meals out, usually leisurely lunches with friends.
I went to my craft group and made three cards.
I finished knitting the body of a sweater (my first real garment knitted in the round) and picked up the stitches to knit the first sleeve.
I finished knitting three hats and posted them to the Sailors Society.
The garden is more-or-less ready for winter.

BUT
the sewing machine had a hissy fit so the skirt I had hoped to sew and the Christmas stocking I had been asked for are still in the same state.
I didn't get around to making a freezer inventory.
The dining room is worse than ever.

October will be a new month.

My hopes and dreams so far.

Start scanning the family tree (which my late sister researched) so I can distribute to my cousins at Christmas.
Knit at least a sleeve on the sweater
Persevere with the crochet.
Take a harvest festival.  (How did I let myself get landed with that?)
Get my sewing machine back and get the skirt made.
Make the stocking and wrap the stuff to go in it.
Make that freezer inventory.

Posted by Frugally challenged at 09:39 6 comments: 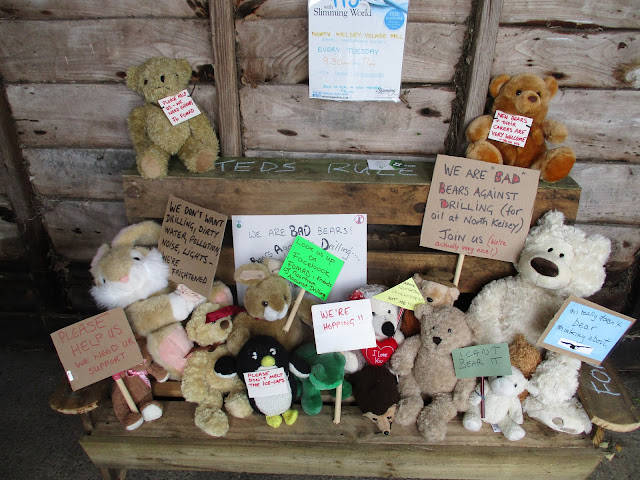 I live in a very peaceful part of Lincolnshire - or so I thought.  Today I discovered that the local teddy bears have risen in protest against oil drilling and have occupied a local bus shelter. 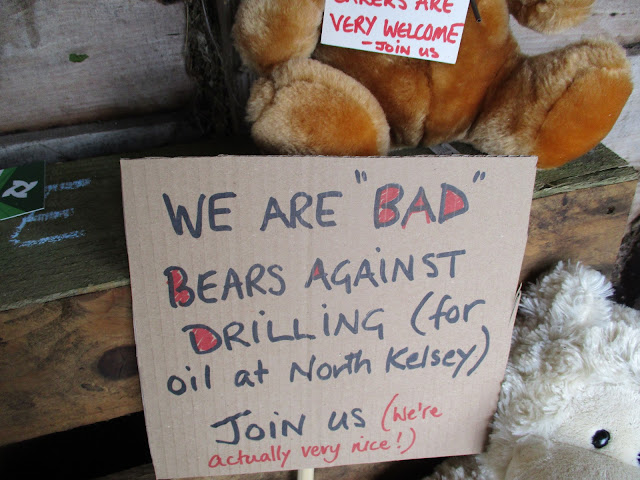 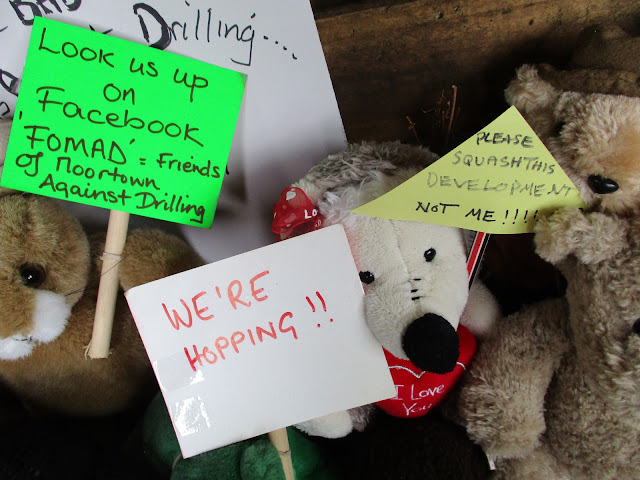 Posted by Frugally challenged at 10:56 6 comments:

Email ThisBlogThis!Share to TwitterShare to FacebookShare to Pinterest
Labels: Lincolnshire

Third Friday in the month - so I've been to Mandy's for my monthly card making session.  Three Christmas cards were made - don't forget there are only 95 days to go! 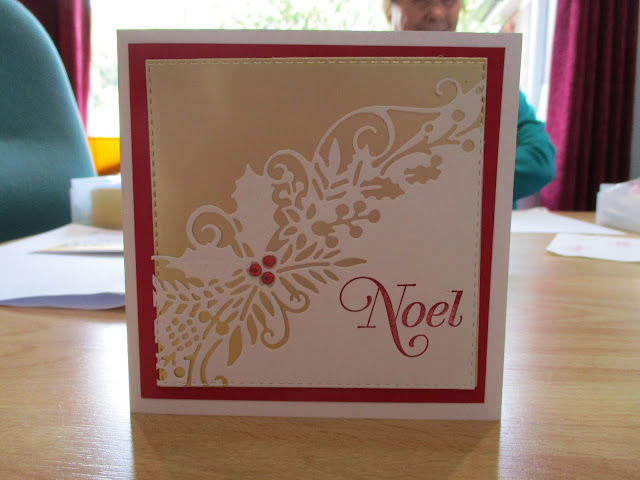 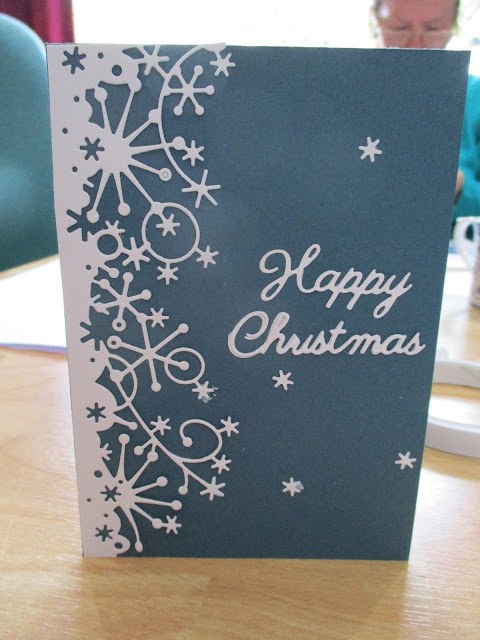 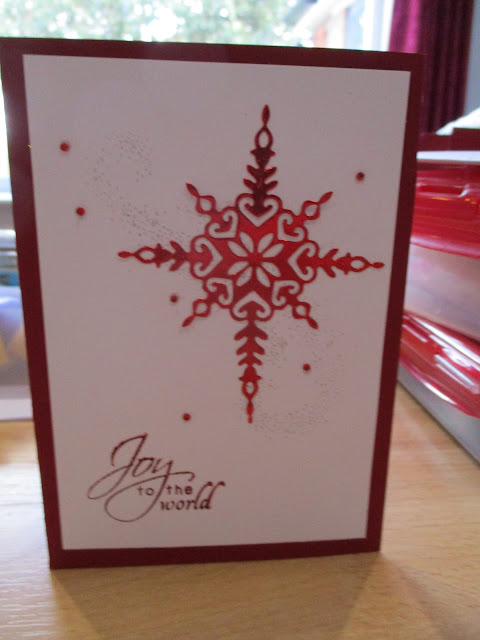 Posted by Frugally challenged at 15:40 4 comments:

When I wrote it down I was rather surprised at the amount of stuff I had in mind for September and I have to admit it looked crazy!  However, nothing ventured, nothing gained so I waded in.  Here's what's happened in the first half of the month.

1.  Watering someone else's garden.  What I didn't mention was that this involved a thirty mile round trip each time.  The weather helped - I went just four times to supplement the rain.

2.  Start crochet lessons.  I've been to the crochet group twice so far.  I could crochet already but I couldn't follow a pattern and I could work only in circles and squares.  I've started on a ripple blanket but it has involved a lot of pulling down so I'm not going to show you a photo yet.

3.  WI meetings.  Definitely accomplished.  I showed my support for Women's Suffrage and I ate a Harvest Supper.  I also won some daffodil bulbs in a harvest quiz - a bonus to be fully appreciated in the spring .

4  One Trefoil Guild meeting attended and the second is later in the month.

5.  The baptism is today.  Also I suddenly got bookings for Sundays.  I've taken a service today with less than two days notice.

6.  Three meals out thus far, one cancellation and three meals still to go.  Does that add up to the four I had planned?

7.  I've declined seven Harvest Festivals.  I love going to them but hate leading them.  However, I've also said, "If you're desperate . . . "

8.  The big accomplishment is that I have made 94 Christmas cards.

Can't stop though.  Lots to do.  Only one hundred days to Christmas.  (Sorry about that!)
Posted by Frugally challenged at 11:06 18 comments:

Out to Brigg today, to Brigg Women's Institute.  I'm a member at Brigg as well as Caistor and on the second Wednesday each month I go to Brigg.  Today was Brigg WI's celebration of the hundredth anniversary of start of women's franchise and we combined that with a meeting run with many of the elements which were common in WI meetings in 1918.

Back in 1918 only women over the age of 30 who were householders, the wives of householders, occupiers of property with an annual rent of £5 and graduates of British universities were allowed to vote.  Not exactly universal female suffrage.  It wasn't until 1928 that women got the vote on the same terms as men.

But 1918 saw that all-important start of women's suffrage and 2018 has seen celebrations of the centenary of the 1918 Representation of the People Act.  Brigg WI decided to celebrate the anniversary in style.

We stood in our green, purple and white bunting festooned room and sang, "Jerusalem" just as our foremothers would have sung in 1918 and then we watched a demonstration of upcycling.  (Early WIs always had a practical demonstration, a talk and an opportunity to socalise) before Councillor Holly Mumby-Croft spoke about her own career in politics.  Holly is a District Councillor in North Lincolnshire and last year she stood as a parliamentary candidate winning 17485 votes but sadly the sitting MP won 20916 so she isn't an MP yet,

The WI had a great time.  Many of us, (me included) wore "Votes for Women" sashes and Kate, our President was especially stunning.
Posted by Frugally challenged at 21:27 8 comments:

And this is September

A whole new month!  And I've got very little in my diary.

Except a week of watering someone else's garden, maybe starting crochet lessons, a couple of Women's Institute meetings, and maybe a couple of Trefoil Guild meetings too.

Oh and I'm booked for a baptism, four meals out and a crafting group. Maybe a harvest festival or two.

There's a skirt cut out and waiting to be sewed.  I'm not too far from finishing a sweater and a couple of hats.  The Christmas cards must be made this month. Someone has asked for a Christmas stocking.

The garden needs preparing for winter and a new freezer inventory is needed.  I'd like to sort my dining room too.

Did I say that I have very little to do?  There are only twenty nine days left in the month to get all that done!
Posted by Frugally challenged at 09:42 6 comments:

So that was August

August was a very lazy month!  I've had a few bursts of activity but I've done a lot of lounging around.  Aren't I a lucky girl! 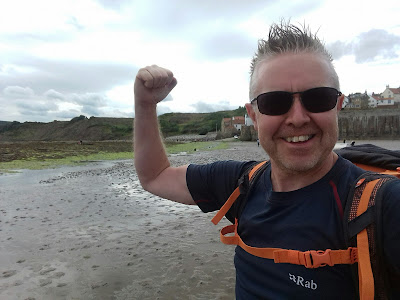 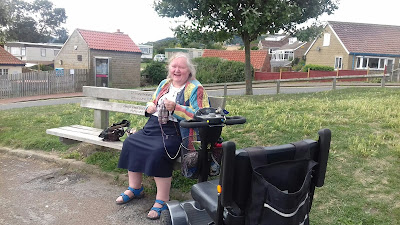 The high spot of my month was definitely my trip to North Yorkshire.  I feel so proud of my nephew who completed the Coast To Coast Walk with a huge grin on his face.  It's about two hundred miles long and he did it in less than two weeks so I think I am allowed to be a very proud Auntie.  Mind you, he says I am a very eccentric auntie as I sat and knitted on the cliff top as I waited for him.


This trip also brought joy as I sought out a very old friend with whom I was in danger of losing contact.  She had moved and it was by a mere fluke that I managed to find her.

I value friendship highly and have had several meals out with friends including a birthday meal for one of my cousins.  It's one of the joys of my retirement that my cousins are once again becoming my friends.  Another cousin came and sorted my TV so I can stream programmes and yet another rescued me when my washing machine had a hissy fit.

I've had another comping win - this time of tickets for a house renovation show in London but I'll be giving the tickets away.

I've had another of those sad/happy times when a group of parishes which I've been looking after got its very own vicar so I am redundant.  I'm happy for the vicar and the parishes though.  Don't worry, another group has already approached me and I've done a wedding and two funerals!  I'm having a few Sundays in the pews of my local church then I'll be out again in the villages every Sunday, I'm sure.
Posted by Frugally challenged at 08:40 10 comments: